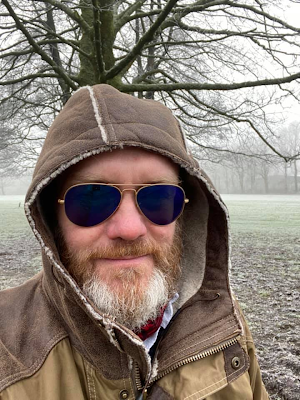 I fell into Sci-Fi at school at around 11 when our English teacher had a regular “buy a book” club thing. Started with The Stainless Steel Rat and from there went through Heinlein, Asimov…all the usual. I discovered your work after running out of books to read on my Kindle – Amazon recommended “Gridlinked” – and was hooked from there.

I was always against reading on a Kindle until I saw one – I promptly put over a thousand “real” books into my storage unit and went on a buying spree on Kindle. It has pros and cons – but for me, the ability to take my books with me everywhere and easily read in the bath outweigh the small cons. I don’t watch TV so I probably go through 3 books a month.

Who am I? Well, studied Physics at University – well, I say “studied” – I spent more time drinking beer, chasing girls and playing guitar. An education well spent. Prior to lockdown I was in a regularly gigging band – playing 80s rock…I’ll spare you the pictures of the spandex.

Work wise I used to tell computers what to do, but now I tell people to tell computers what to do. I set up my own company about 20 years ago and have been working from home mostly ever since – currently consulting as a CTO for company.  Hobbies wise, aside from the “making the world a louder place” with guitar, I ride a motorbike (or motorbikes…I’ve got a garage full – or, as my son calls it “The Toy Box”) and I am a fencer. Took up fencing in my early 20s thinking it was a nice noble art – no. You’ve had a bad day at work and you’ve got to hit the person in front of you with 3′ of steel. It is one of those sports where people either absolutely love it and it becomes all consuming or they are “meh”.

For me – all consuming became the thing. I ended up represented England at the Commonwealth Games – didn’t win though. Came 21st. People tell me that this is great – but no – it is the winning that matters, not the taking part!

I spend a lot of time walking my dogs – which is about the only thing we’re allowed to do during these plague times. I’m not going to get political here, but I rather suspect I agree with you.

Life wise – I recently went through a difficult divorce (is there any other type?), and your books really helped me through. I became the curmudgeon in the corner of the pub with a pint and his dogs at his feet a reading a book. It was a difficult time, but things are turning around. I won custody of my son – who I raised, pretty much on my own, since he was 9 months old. He’s now 13 and is my “reason”.

My girlfriend and her daughter recently moved in with us – thankfully the kids have been raised together since they were toddlers so they already had a sister/brother relationship. We have become one big happy family. Well, except for her tiny (3Kg) King Charles Spaniel. He bullies my 2 giant dogs (45Kg each!) endlessly – still, they’ve sorted the pecking order out – the big dogs sleep by the fire and tiny dog guards the house.

I’ve attached a photo of me in my “winter plumage”. It started a few years ago with Movember – and then it morphed into “Hobo February” – and now, and my son’s behest, every year at the first hard frost I stop shaving and then don’t shave again until I go away overnight on my motorbike (usually March before it is warm enough and Jnr is at my parents). Last year with the lockdown the beard got, well, hobo is the only word.

I’m gonna take this opportunity to appear a smidge sycophantic and say “thank you for your books”. To many people, certainly me, they are an escape from the horrors of the real world – and they’ve certainly helped me through difficult times. Keep ’em coming!