Here are another five desert island reads (once again demonstrating that my fans can’t count) for you to pore over and discuss whilst I bugger off down to Hastings for a few days to eat fish and chips and drink red wine. 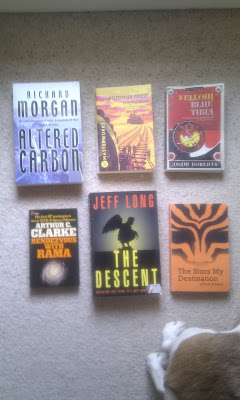 Here are my desert island books. Sorry for the poor quality photo – was taken on my phone as I cannot find our camera, and also for for my dog’s ass – he would not move out the way!

Like others have found I really struggled to cut the list down so I also have cheated slightly. Rendezvous with Rama & The Stars My Destination are both quite small you see – so I figured that they would only take up the room of one larger book (self justification, self justification).

I walked along my shelves and could easily have doubled the number I ended up with, but I made a deliberate choice to not have books others have chosen (with one exception, more on that later), so there are no Asher, Banks or Baxter, however the choices for those would have been the Skinner (first Asher book I read and look where that got me 😉 ), Banks would have been possibly Player of Games, but that would have been a difficult choice, and for Baxter well, god knows. As someone mentioned – he turns his hand at everything and is pretty damn good at it all!!

So, onto my choices:

Rendezvous with Rama (and the follow up Rama books too) – Arther C Clarke – 2001 may be a seminal work and it truly is a good book but the Rama sequence is an epic journey of a story. I this when I was about 17 ro 18, and it has shaped my reading ever since, I very quickly had to read the following trilogy of Rama books. I was always drawn to SF, but I think this book sealed the deal.

The story follows an alien cylinder which enters the solar system so we send an crew to find out what it is. We follow the crew through there exploration and slow understanding of the vessel only to be left wanting more at the end. Then followed a series (3 more) of books which take you onto a universal scale tour finally exploring the true meaning of our place in the universe.

The stars my destination (Tiger Tiger) – Alfred Bester – my only double of someone else (I think), but I had to have this here. I read this in one night, I was just lost in the story. The story of Gully Foyle is intense and dramatic. Revenge and murder are both beautifully shown in the story. Our protagonist develops from a feckless nobody into a one man killing machine with high intelligence and, more than a desire, a necessity, to succeed in his mission.

The Descent – I read this before the movie came out, again when I was 19 or 20. Its the story of an underground world of ‘monsters’ who became more advanced than us, but then lost the skills and smarts (or just stopped learning) while we on the surface kept on expanding. If I remember correctly a group of explorers go wandering, get into trouble, then it escalates with the army becoming involved. There is war, massive scale death, ambushes and deception.

Hmm, haven’t read it in quite a while so need to re read it – I’m struggling to remember the finer details of the story, but it made enough of an impression for me to choose it here.

Altered Carbon – the first of Richard Morgans Kovac’s trilogy, and also Morgans first novel. Its a fast paced blitz through a short period of Kovacs life. He is a former Envoy – a special forces solider – who has been forcible ‘hired’ by a man who is part of the long lived ‘Meths’ (Methuselah), This man was killed but everyone has a cortical stack which records the essence of the person. This can be backed (if you have the money) up so Bancroft only lost 24 hrs – now he wants to know why.

The only way to truly kill people is to blow out the stack and hope they don’t have a backup somewhere.

Inverted World – Christopher Priest, I had not read any Priest stuff before but this definitely makes me want to (he also wrote the Prestige which was a film with Christian Bale and Hugh Jackman). The story here follows a city which travels along tracks to stay ahead of time. The residents of the city have to build the tracks ahead of them, and rip them up from behind. Along the way they encounter ‘natives’ from outside the city who the occasionally trade with. Often the trade involved the ‘loan’ of women who are used for breeding to ensure the city’s population remains topped up.

The story follows one man growing up and becoming an explorer who helps to produce the route that the city must take. These explorers age artificially quickly, due to the nature of the world. Big revelations and a fantastic slow reveal twist make this a brilliant read.

Yellow Blue Tibia – Adam Roberts. This is an excellent, comedic tale that starts with Stalin calling together a (dozen perhaps) SF authors from across Russia to write a story about alien invasion and domestic terror. This is to be used to replace the waning threat of America so that Stalin can keep the Russian citizens under control.

Quite quickly the group is disbanded and told to forget everything they have thought of ‘or else!’

Years later the story they wrote appears to be coming true. The story is excellently written with some fantastic laugh out loud sections, (the torture section where our protagonist turns the questions around on his questioner – I had to read twice because I kept laughing!), but its not all jokes. There is a very good twisting story that keeps moving from start to end.

Definitely recommended – as is ‘Dragon with a girl Tattoo’, a recent Roberts book parodying a certain Swedish novel that has recently been making waves!

I can certainly recommend all the above for people to read. Hope that above has made good reading.

Bugger – just remembered about Joe Haldeman – Peace and War (forever war series), another I would happily have on my island, but thankfully that’s been covered by someone else!

Oh – and any spelling mistakes have obviously occurred while Neal put this on his blog as opposed to during my typing!! Honests…