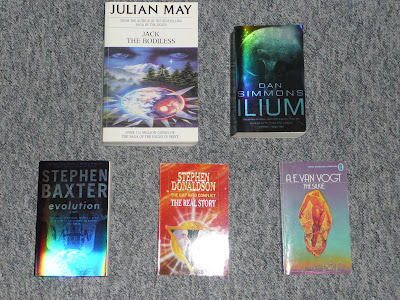 Well, that was a challenge and if you give me another ten minutes I’ll change them all again.

One thing I have now noticed is that most of the books I read these days are multiple volume stories. There are many authors I could include, ASHER, Hamilton, Clark, Reynolds, Banks but it’s always nice to have some variation. Of course if I washed up on a desert island with my luck the only other survivor would be the crate of Mills and Boon!

Jack the Bodiless by Julian May. After borrowing The Saga of the Exiles from a friend and thoroughly enjoying it I moved on to this, The Galactic Milieu series. Mankind’s telepathic abilities awake and while they argue and fight among themselves the rest of the galaxy watches, for a while anyway. I just liked the concept and as most of the story was set in modern times you can relate to it a little more. Unfortunately Mays later books did nothing for me.

Illium by Dan Simmons. Now here’s an author that can knock out a mean book. Dan, as already mentioned by Rob Darby, is probably best known for The Hyperion books, which I have read, but my preference is for Illium/Olympus. The siege of Troy mixed with sentient robots and strange goings-on on planet earth, what more could you ask for. Dan is one of these authors who can turn his hand to anything it appears; SF, detectives, horror.

Evolution by Stephen Baxter. Where does this man get his ideas from? Mammoths, alternate history, “human” civilizations existing at the micron size, to name but a few. I have yet to find a Baxter book I didn’t enjoy. I would have to place him as my second favourite author…………..can you guess who’s first?

The Gap into Conflict by Stephen Donaldson. This, of course, represents the whole Gap series. Having read “The Chronicles of Thomas Covenant” and being very impressed by a fantasy that didn’t obviously rip off the Lord of the Rings I think Donaldson made an exceptional debut in scfi. He has since chosen to revisit Thomas Covenant but hopefully he may write some more scfi in the future.

The Silkie by A E Van Vogt. This I’ve had for a long time so it must have something going for it. If I remember correctly it’s about genetically modified humans. I don’t know if I’ve read any more of his books and certainly can’t name any. This obviously needs more investigation

So there you go, hardest bit of work I’ve done all week!