It’s proved incredibly difficult to cut this down to five, and since two of the five would have been yours (The Skinner and The Technician) I decided to arbitrarily exclude your stuff in order to not look too much like I was blowing smoke up your you-know what..

Others bubbling under the top five would be David Brin’s Brightness Reef (representing it’s trilogy), The Illium and Olympos duet by Dan Simmons (as well as his The Terror which I think is Sci-Fi for reasons too complicated to go into here) and Chris Wooding’s Retribution Falls.

Anyway, on to the five. 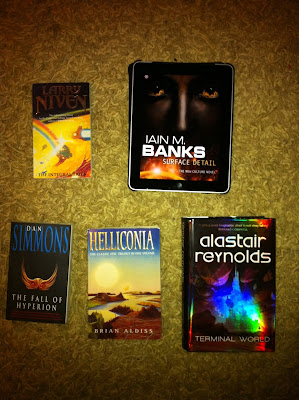 The Integral Trees by Larry Niven.
One of Larry’s lesser known works (along with it’s sequel The Smoke Ring) and from the period when he was arguably past his best, but for me the story of Sharls Davis Kendy, Checker of the starship Discipline, keeping his ancient watching brief shows that Niven’s huge imagination was still as fertile as ever, with it’s description of a long-lost society of humans growing up among the bizarre vegetation and creatures of a gas torus.

The Fall of Hyperion by Dan Simmons
To some extent this is representing it’s three siblings (Hyperion, Endymion and The Rise of Endymion) but this one is my favourite of the four. Simmons has a remarkable talent in creating an entire , fully realised, civilisation within a single novel where others might take a whole sequence to get to the same amount of detail, and the world of the Hegemony of Man is one which we would love to live in, at least until we find there is a worm buried in the apple. It’s crammed with breath-taking vignettes, and I’ve been haunted by the final choice of Hegemony CEO Meina Gladstone since I first read the book getting on for 20 years ago.

Helliconia by Brian Aldiss
Perhaps cheating a little here, but my version of The Grand Old Man of British Sci-fi’s best work has all three volumes of the Heliconia cycle in one book, so I am having it as one of my five. There is a wonderful sense of momentum – the slow tumbling cycle of history, in the complex dance of the two stars of the Heliconia system and the effects the resulting centuries-long seasons have on the fortunes of the two sentient species of the world. There are discomforting parallels (for me) between the way our society seems to be developing and the parallel story of the deteriorating Human mission to Heliconia observing the planet below from their space station.

Terminal World by Alastair Reynolds
For me the mark of great Sci-FI is to create so compelling a world that as soon as you put down the book you want to know what happens next – want to go back there. I’d hate to think that Reynolds might not revisit the remarkable society of the Terminal World, which he leaves with many questions unanswered. Much of the pleasure in the book comes from following the clues Reynolds leaves as to the real nature of the world he is describing.

Surface Detail by Iain M Banks
A return to form for Banks, whose sci-fi output has been (for me at least) disappointing of late. I read it in one sitting while crossing the Atlantic in a B747, and the wonderful twist at the end, dropped in so gently it feels like an afterthought, more than made up for the six hour delay in leaving London. It’s always great to visit the Culture (another society we’d surely love to live in – and for me a sort of mirror image of the Polity) and Banks has excelled in creating another in his long line of memorable villains and slightly punchable sort-of-heroes.

Anyway, that’s the top five, at least for today. Probably be completely different by tomorrow