First…curse you Neal Asher for limiting it to five books.

That out of the way I am subverting your rules slightly in order to pick ‘some’ of my most favourite books – ones I’d always want to have with me. Let’s pretend 9 is 5 in new math. 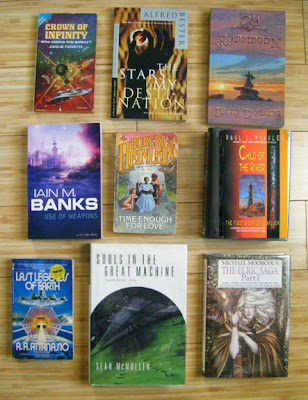 Crown of Infinity – John Faucette: For some reason I come back and back to this book. It has elements of Cordwainer Smith in it, early grand ‘today-style’ serious grunge space opera (echoes of Reynolds, Asher, Mieville and Banks within), with cybernetic human/machine/ship amalgams and a story of revenge that takes millennia. I do not know much about Faucette other than he is paired with a number of other authors in many of my Ace Doubles.

Stars My Destination – Alfred Bester: SF Grandmaster with good reason. This book currently seems in fad again with everyone calling ‘teleporting’ – ‘jaunting’. While based on a classic French novel – The Count of Monte Cristo – it is a fundamental building block to many later cyberpunk tropes. For me it is a guilty pleasure if I need a quick and bracing read.

Rynemonn – Terry Dowling: I quickly fell in love with the tales of Tom Tyson when i first found these stories collected in 4 books and a few anthologies. One part Cordwainer Smith, one part Moorcock, one part lowtechpunk, one part just damn fine literature. This is the ‘current’ final story collection in the series and collects many of my favorite stories, the last one of which “Sewing Whole Cloth”. I have read probably 20 times and, each time, I find the ending strikes me in a different way.

Use of Weapons – Iain M. Banks: As I look at the books I’ve picked I find most of them have a common theme of revenge and love. This is certainly no exception to that. It is my personal favorite Banks novel. I thought the ending stunning and it still moves me.

Time Enough For Love – Robert Heinlein: I’ve read all of Heinlein’s works over and over (and though I know he is currently out of favor for many of his views he is still and forever will be one of the founding fathers of SF). This book strikes me as him at the top of his game in the long novel form. I feel for Lazarus in this as he watches those he loves grow old around him. The chapter with him and his wife being held hostage by rapists and Lazarus’ subsequent solution to that dilemma is still exciting even though I know what will happen. This is one of the few books in my collection with a cracked spine and well-worn pages. And that is saying something for me.

The Confluence Trilogy – Paul McAuley: To me – a beautiful circular trilogy/bildungsroman about a boy growing to manhood and the mistakes he makes. McAuley had a wonderful mix of Ringworld style world building with a variety of cultures of different technology levels and biological types. Of special interest to me is that the 3 volumes are circular and end where they begin. I once read all 3 of these twice through and found the second immediate reading does change after you read all the books the first time and arrive at the circular point and begin again.

Last Legends of Earth – A.A. Attanasio: I think he remains little known as an author but I quite enjoy this book and have read it several times. It is the 4th in a series with massive overlapping of narratives in multiple instances of time and space. It has an Olaf Stapledon eon-spanning feel to it. Again another book of love and revenge and how the two intertwine.

Souls in the Great Machine – Sean McMullen: Australian air-punk (not even steampunk level tech allowed in this alternate Australian future) featuring living computers made of slaved mathematicians, a huge cast of Canterbury Tales style characters and a unique to me plot mystery solved over the course of the three books of the trilogy.

Elric – Michael Moorcock – still my favorite fantasy series. What more can be said?