Crete seems to be a place of extremes, on one hand you have magnificent beauty and humbling kindness, and on the other extreme there’s greed, ugliness and unbelievable cruelty. So now I’m going to tell you about the week my builder has had, and the week we have had. 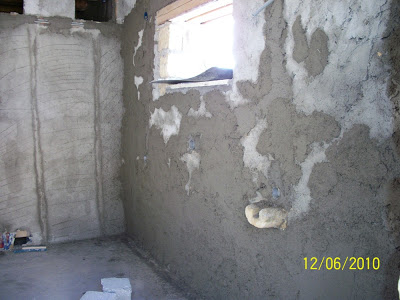 So, as you can see by the pictures here we’re reaching the stage where the electrics need to be installed prior to the interior walls being rendered. I already knew of an English electrician in Makrigialos who would do the job, but he’d told me that it would be three weeks before he was free. Mikalis informed me that he had an electrician who would look at the job and if his quote was okay he would start the following Wednesday. For an easy life I said to get him in for said quote. That weekend, the day before this electrician was to turn up, the English one called me up. I’d screwed up. Things had been so busy that I hadn’t realised that nearly three weeks had passed since I’d spoken to him. I had to apologise profusely and say that I had someone else in. Foolishly, because those Mikalis has had in for work have all been good, I didn’t forsee any problems with the coming quote. There were problems, it was an obvious out-and-out rip-off number. Even with the guy being on a hundred a day,for four days, the figures simply did not add up. Most likely that Greek calculation for ‘rich English’ was employed: think of what you want and double it. 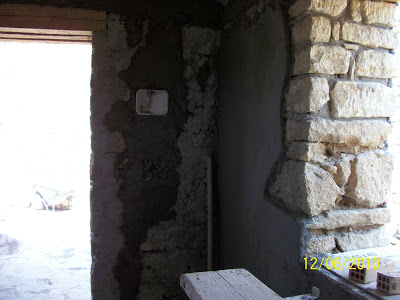 I now had to eat humble pie and phone up the English electrician, fully prepared for him to tell me to fuck off. ‘Ah, you got a Greek quote,’ said he, then came up, looked at the work, and delivered a quote more in the range I expected – neither too high nor too low. I said he’d got the job and paid over part of the price so he could buy the materials. He drove to Ierapetra to buy the required wiring, plugs, fuse box etc. We knew this because he phoned to ask about leaving the stuff at our house. However, he got us on Caroline’s mobile because we were in Sitia that day, shopping.

This was also a day that Mikalis and his workers did not turn up, which was odd – he was normally here at 7.30 punctually every morning six days a week. I assumed he’d got a hangover and left it at that. Then, whilst we were in Sitia, I checked my phone and noted a missed call from Mikalis. I phoned him and, upon hearing that he’d had a bad day, jokily asked if he’d had too much raki the night before. No, his wife was in Agios Nikolias hospital and he was there with her. He then went on to inform me that I must stop my English electrician coming because if he does the Greek electrician along with other Greek electricians is going to cause big problems. I wasn’t sure whether these problems were tax related or whether they were going to come here and beat up my guy.

Not wanting any problems, and unable to talk face-to-face with Mikalis because, quite obviously, he wouldn’t be coming for a while, we decided on a course of action. We drove over to see the English electrician, paid him for the materials he’d bought and gave him an extra 50 Euros because he’d been pissed about. He seemed to accept that and agree that avoiding problems was the best course, though whether privately he thinks I’m a prat I don’t know.

That was Tuesday. On Thursday Mikalis arrived and I managed to talk to him. His wife was now back at their house with people looking after her. The Greek electrician was now nothing to Mikalis and, because it was through him that this problem arose, he was getting another electrician in who he would help, and he would pay the difference in price to the English electrician’s quote. Okay, fair enough.

Anyway, whilst I was learning all this, I noticed a little black and white puppy following one of the builders up and down the ramp to the ruin whilst he was pushing a wheelbarrow. I thought a stray had arrived (there’s too many of them here). Yes and no. Mikalis has a couple of dogs and apparently his mother wanted one. He saw this puppy abandoned at the side of the road and picked it up that day. Lovely little thing, all waggy tail and licking your hands, and it would sit on command, which was surprising.

Okay, some of you might like to stop reading now, especially those who turn away from RSPCA adverts or find Animal Hospital too traumatic. You’ve been warned.

Now, whilst Mikalis and crew were working, the puppy was happily wandering around with them until it wandered off a little way. Caroline and I were inside the house, mostly. Next thing we knew there was an uproar outside. I saw Mikalis charging down the path to a nearby house, hammering on the door and shouting. He managed to switch to his broken English to say to us, ‘Find dog!’ My immediate assumption was that one of the kids nearby had thrown a rock at it and it had run off, injured. It’s a pastime they enjoy with the village cats.

No, it was much worse than that.

A septic little cunt in this village had, allegedly, decided it might be fun to soak the puppy with something like petrol and set fire to it. I have to say allegedly even though there was only this shit and his little brother in the relevant part of the village, and puppies don’t spontaneously combust. 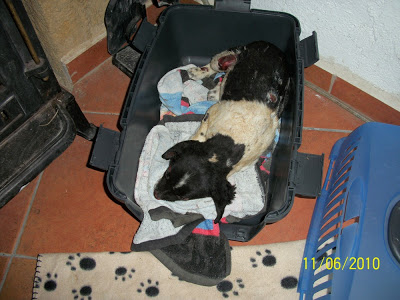 We found the dog, hiding in another nearby building. Mikalis wasn’t sure what to do, maybe some Betadine on the burns. I told him it needed to go into water, now. I used a bottle of cold water from the fridge and also filled up a bucket with a hose pipe and we dunked the puppy in that. It screamed, of course. We finally wrapped it in a wet cloth and brought it to our terrace. It got up and ran into our house, hiding in some bags under our spare bed. Terrified, in agony, stinking of burnt fur. Mikalis called the vet in Sitia, but he wasn’t there. Caroline called our nearby English neighbours – just outside the village – and Terry, the wife of the couple, immediately came over. She was very good. She managed to get the puppy out from under the bed – I didn’t want to grab it for fear of hurting it – sat it on her lap and put Lanocane on the burns. We then put the puppy in a box with towels and cloths for it to bury itself in. Terry then gave us directions to the vet in Ierapetra. 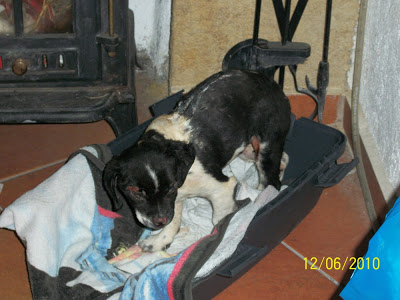 This was an hour-and-a-half drive. We first drove down to Makrigialos where we saw Jacko, a Dutch guy we know, walking down the road for his carafe of wine. We stopped and told him, mainly because he has dogs and almost certainly knew the location of the Ierapetra vet, which we were vague about. He got in the car and directed us there.

The vet used some sort of antibiotic powder on the burns, injected both antibiotics and a pain killer, then provided us with antibiotic pills, painkillers and cream. We brought the puppy back here to look after it for as long as necessary – if it survived – before Mikalis took it to his mother. Terry returned to find out how things were and, at that time, the subhuman village child, who had been in hiding all the while, showed his face out of the door to his house. Mikalis immediately began shouting at him, then rushed down to catch him and … well, it was most satisfying, but nowhere near enough. That evening Caroline and I also had a go at the little cunt. The parents of this monster finally turned up at about 8 or 9 in the evening, and we told them what their little darling had done. Whether they are doing anything about it I don’t know. My guess is that they’re keeping their heads down until this all blows over, and that the child his planning his next animal torture session. 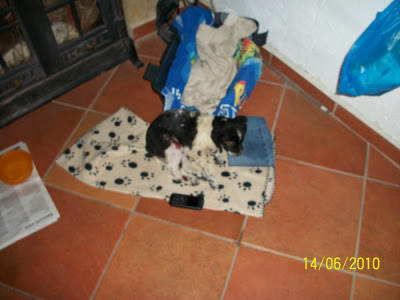 The puppy is sleeping now, mostly, when not whimpering. She’s drunk water and drunk evaporated milk. This morning we haven’t had a chance to give her any pills because she hasn’t eaten anything. Mikalis is here and he will be going to have a word with the parents. I decided, last night, that if this puppy dies I will grab that village child, drag him up here, rub his face in the corpse whilst asking him if he likes it, in Greek, then I’ll make him carry it down to his parent’s garden and bury it. That’s if he doesn’t have some unfortunate accident on the way, you know, like falling into that large prickly pear cactus beside the path.

A traumatic weekend, of course. It’s very difficult to put on the cream the vet provided but now we’re there – I dribble it onto the burns whilst she is asleep. I also put aloe vera cream on the less serious burns. After some initial problems getting the pills down her I now wrap them in a piece of soft cheese, then hold her mouth open while Caroline inserts cheese and pill to the back of her tongue, then I hold it closed until she swallows. She’s now eating solid food – sardines in oil were the first success – and has managed to walk about a bit. She’s also well enough to complain about her pain. She also often wags her tail when she sees us, which is amazing, considering the pain we keep causing her whilst treating her. I still don’t know if she’ll survive – one infection and that’ll be it – nor do I know if she’ll ever see out of her right eye.