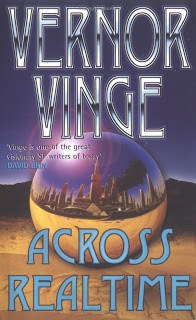 Ah, it’s Mr Singularity himself with tales of pre then post singularity worlds ‘bobbles’ can isolate and freeze in time their contents. It’s dated a bit now what with these two written in 1984 and 1986 and a world war in 1997 but enjoyable none-the-less. There’s also something very believable about the abilities of the future humans and, frankly, all the characters are engaging and you regret knowing no more about them when the story ends.
Note, don’t make the mistake of buying this if you already have either Peace War or Marooned in Realtime because those are the two tales here. I’d also recommend, if you haven’t read them yet A Fire Upon the Deep and A Deepness in the Sky.