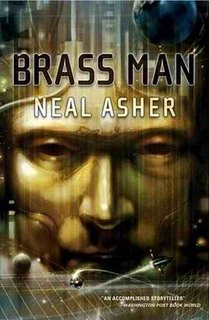 Ah I see the cover for Brass Man is up on amazon.com, but sadly it’s not out in America until January, and sadly The Line of Polity isn’t coming out there (yet?).

Interesting day, in the Chinese sense of ‘interesting times’. I sat down to write some more chapter starts for Hilldiggers only to receive a phonecall from my mother informing me she had called an ambulance for my father. He was coughing up blood, amongst other unpleasant symptoms, and he’s only just come out of hospital where they were filling him up with the stuff. We went over there to find the paramedic working on him, then when the ambulance picked him up we followed that to the hospital, where we waited expecting the end. It didn’t arrive – more blood, drugs, treatment. Thus far he’s had a stent put in for a bile duct blockage, that followed by chemo for the tumours (lung and pancreas) that led to that blockage, followed by shingles and a skin infection … it’s been going on for some months now. I now intend to get completely and utterly slaughtered.