Skip to content
So, I sat and watched Altered Carbon on Netflix. A few episodes in I lost track of what the hell was going on. This was due to actors mumbling, changes in language introduced for no purpose and, frankly, a viewer with tinnitus. Turning on the subtitles solved the problem. 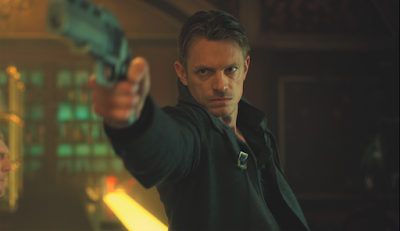 It’s been sixteen years since I read Richard Morgan’s excellent book so in essence I was coming to this like a newby. I remembered that there was a particularly violent and cool character called Takeshi Kovacs, that people had cortical stacks and that they could be resleeved, and that they could also be tortured in virtual reality . . . and that is about it. This series gave me precisely those things and I enjoyed it very much. My criticism would be that it did not have the breathless excitement of the book because I remember putting that aside feeling like I’d been put through a rolling mill. In fact in this, towards the end, I started to feel that the action was too stylized and dragging. However, it is smart enjoyable science fiction and streets ahead of most of what is out there. I wouldn’t put it on a par with The Expanse but I would put it far above the Trek dreck and all that Marvel superhero nonsense.
I then noted that quite a lot of people were criticizing this because it’s ‘not like the book’ and ‘unnecessary changes have been made’, so I skim read a bit of the book. These critics are right. I note that religion has been dropped in there in an ‘understanding’ way, while in the book (just from the bit I read) it got a similar treatment to what I gave it in my The Line of Polity. I believe it got the ‘oh you idiots’ atheist treatment. Roles and story lines were swapped and consolidated like Quellcrist Falconer, like Kovac’s past and no doubt others things I would only be aware of if I read the book again. And I don’t have much of a problem with these. 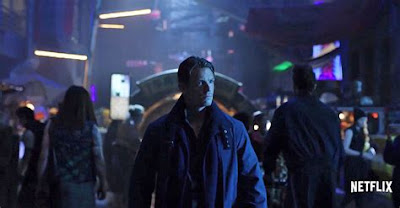 I understand how you need to take a lighter more understanding view of religion if you are not to alienate a large portion of your audience (I reckon this was why Tor US, while publishing my books, made size excuses about The Line of Polity and didn’t publish it). Many of the other changes were maybe unnecessary but they were the vision of those who were translating it to the screen. So what? We got some damned good SF, taken seriously, on our screens and, FFS, the book has not gone away! It also means that other works are more likely to appear! Some changes I would say were necessary and they were improvements. Science fiction has moved on in sixteen years and, for example, I much prefer the version here of Bancroft’s house to the one described in the first chapter of the book.
Other criticisms have been that it was a pastiche. Well, I would argue that all science fiction is that – it is built upon what went before. Yeah, I saw the spinning ceiling fans, the noodle bars on the streets and the overall street scenes and thought, ‘Blade Runner’. I also note that Kovacs floating in the tank and the ‘fallen angel’ woman were very much like the signal image from The Expanse. But it all worked. It is up to you whether you denigrate these as pastiche or smile at the hat-tips.
In all I enjoyed this. It wasn’t entirely the book we read but, well, even the books we read aren’t that when we return to them. Hence the title above: this was Altered Carbon ReSleeved. 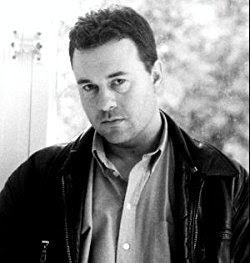