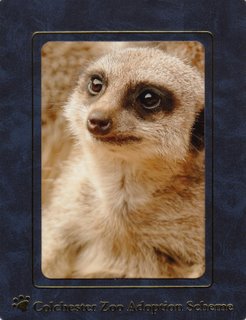 As a present someone paid for Caroline to ‘adopt’ a meercat called Rizzo at Colchester Zoo. Included in this gift were some entry tickets, so off we went today to take a look around. It being the school holidays I spent quite a lot of time dodging bollock-height rocket-propelled six-year-olds, and both of us spent time getting out of the way of massive prams (Tell me, why it is that when the toughest 4×4 requires only four wheels these prams require eight wheels?) pushed by fat-arsed dumbos: “Why’s it digging holes?” “Because it’s a meercat and that’s how they look for food you thick cow.” “What’s that?” “Read the fucking sign … oh, sorry.”

I have to say the zoo was a disappointment. It seems much like the Natural History Museum, which only has 20% of its exhibits on display – the rest stored away in warehouses. And what’s taken the place of the removed 80%? In the museum, it’s plastic dinosaurs and interactive displays, in the zoo it’s the latter plus kiddy’s play areas, shops and other similar crap. And another thing: where’s the fucking reptile house? Nope, not there. In our pc green environmentally-aware cuscus-eating dictatorship we have the Amazonian, Asian and African areas. Well fuck off. I go to the zoo to see animals not environments. The most animals I saw were stuffed toys in the shopping scrum you can’t avoid on the way out. Never again.