Well, we’ve been away for a month on Crete, both holidaying and working, which is one of the great things that you can do when a book can be written anywhere with anything upwards of a pen. Whilst on that wonderful island I did occasionally check the Internet when I got the chance, but felt utterly no inclination to rant here or go mucking about on message boards. There was sun to be soaked up, Retsina to be drunk and a sea to swim in … also there were those ‘shrimps’ out there that back here we call king prawns.

Anyway, whilst checking the Internet I picked up on a couple of bits of news. The first is that I’ve conquered another country. The publisher Eridana in Lithuania is taking on Gridlinked and The Skinner, so that pushes the total of national borders my AG tanks have floated over to a round 10. 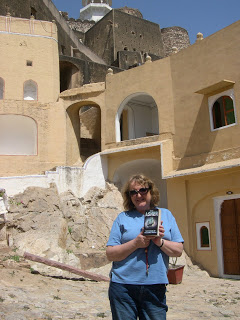 Another bit was an email from Gill Mariner. She is a reporter for our local paper The Maldon & Burnham Standard who often does articles about my various achievements. Those articles are always spot-on accurate even if taken from a babbled phone call. This is something you can’t expect from the national papers. Gill sent me the picture here, along with this email:

…so there I was, trekking through the wilds of India, arriving for a couple of days’ stay, weary and covered in dust, at the remote hill fort of Kuchaman (now a fairly rudimentary hotel), towering hundreds of feet up a treacherous zigzag track above the unforgiving deserts of Rajasthan.
I entered a small cave-like room to be greeted by the friendly guardians of the fort.
In that room was a bookshelf offering a small selection of literary offerings to ease the tired minds of the weary travellers . . . and waddaya think?
Yes, The Voyage of the Sable Keech was among them!
Every word of this is true.
Here’s the picture to prove it.

It is, don’t you think, an increasingly small world we live in. There she was in India, there I was on Crete…

7 thoughts on “Back Again.”