Skip to content
Thursday 3rd May
I just had some fun with emails here, being able to receive them but unable to send them, so my apologies to those who have received late replies. It turns out to have been some sort of ‘port 25’ problem. I checked on the Virgin Media website for the settings of Live Mail and changed the port settings of my mail, which is virgin.net, to those of virginmedia.com, and that seems to have worked. Hopefully it’ll keep on working.

The temperature here is climbing now which is nice but annoying because I’m spending most of my time working inside. When I’m not writing I’m up on a stepladder filling the bamboo ceiling (I’ve done about a third of it now) and, within about a week, our new kitchen will arrive and I’ll have plenty to do putting that in.

The Penny Royal book is now rapidly approaching 100,000 words (in fact I should pass that count today) and developing nicely. I reckon I’ll have it done before Zero Point is published and of course more than a year before Jupiter War is published, so that definitely puts me over a year ahead of Macmillan’s publishing schedule. I’ve decided I’ll file these books about the black AI as Penny Royal 1, 2, 3 etc and allow the titles to naturally arise out of whatever I produce. Tentative titles involve the names of various characters and a particular item: Isobel, Spear, and The Spine, but they may change later.

Friday 4th May
Excellent: last night was the first evening we’ve been able to comfortably sit outside on the terrace. The stars were out and gleaming, the temperature at 21C and further use of the stove is looking increasingly unlikely. Another first on this evening will be the first fresh salad from the garden: the various salad leaves are big enough to cut, and the spring onions and radishes are ready. I’ll provide pictures of these below just to annoy some people in England. 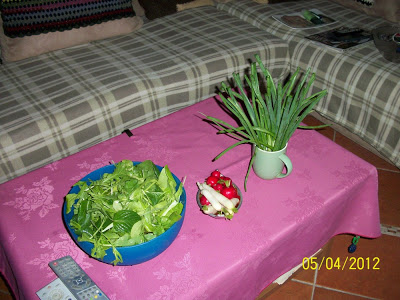 Oh, I do believe it’s raining in Britain now, quite heavily. Any sign that they’re lifting the hosepipe ban, or are you being told that it’s a special kind of summer rain? Here on Crete, under the auspices of the corrupt and failing Greek government, lazy tax-dodging workers and cash-strapped local amenities, where the sun blazes down for, on average, about 300 days a year, there hasn’t been any kind of hosepipe ban or water shortage over the five years we’ve been here. They still manage to supply the massive watering systems for the olive trees, and they still manage to supply all households with water, so much so that a hosepipe rather than a broom is generally used to clear outside paths and terraces. They also still manage to supply an influx of millions of tourists each year. The only time we ever went short of water was when the village main was being replaced. So why is it that such a supposedly crappily-run country can manage to keep the water flowing when a supposedly advanced one like Britain can’t? I’ll tell you why: though you hear the newsreaders and forecasters wanking on about the dry weather, that isn’t really the problem. It’s infrastructure failing to keep up with millions of water-hungry people. It’s the population, stupid.

We also get power cuts here, but they never last longer than an hour. Only in England do we get them lasting long enough for us to start worrying about the food in the freezer. Doubtless the delay is due to the time it takes to fill in the risk-assessment forms, don the required reflective jackets and safety helmets, shut down the required parts of the massive grid (population again) and then replace the fuse.

Monday 7th May
Excellent meal in the Stratos last night. Here’s some pictures of the restaurant, view and genial hosts: 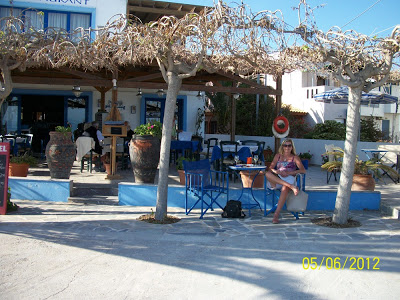 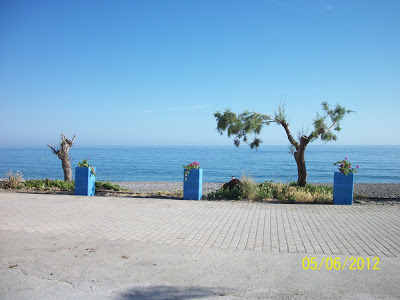 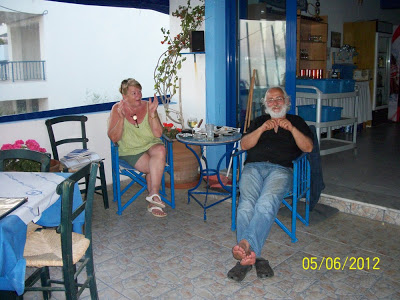 Rather than get back to writing on Monday I continued with what I had been doing all weekend: filling that bamboo ceiling (I wanted this job out of the way before the kitchen arrives), which I completed in the late afternoon, even foregoing our half hour of dancing to the Wii. I had considered painting the bamboo white and leaving the beams as they are, but decided that with a bit of tidying up and maybe a coat of clear varnish, this is how it should remain: 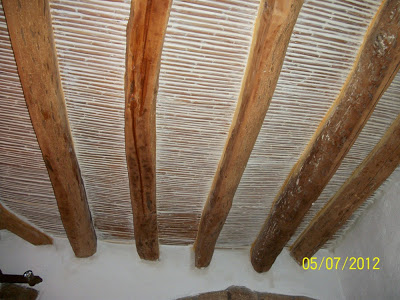 We’ve just watched the first season of The Walking Dead, but on the strength of just the first few episodes we decided we wouldn’t bother with another season. It was mildly enjoyable in so much as the alternative was Greek TV, BBC World or other DVDs we’ve already seen, but that’s the limit of it. For Caroline it failed to grip and was directionless and ‘Lost’. For me it was the glaring holes always found in zombie films. How do zombies who move like, well, zombies, manage to take over the world? As was demonstrated in this the only way these things, which move like rejects from the Ministry of Funny Walks, manage to catch someone is if that someone stupidly manages to plonk himself in the middle of a crowd of them. How do these things, killed by a shot to the head, unable to open doors, climb ladders or drive vehicles … in fact things less capable with any kind of technology than a three-legged cow … how do they succeed against assault rifles, tanks, jets and flame throwers? It just makes no sense at all. 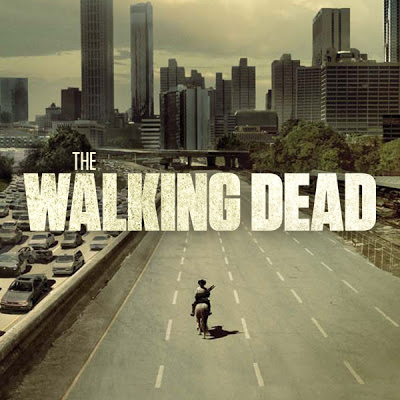 On top this logical hole there was plenty of plotting and directing silliness. In one scene we have someone bargaining for tools, in America, where every garden shed or garage would be full of them. In another our heroes have to cover themselves with zombie blood and guts to cover their smell, then walk along a zombie filled street to a place where keys were available for vehicles they could use to escape the city. Subsequently, after fleeing zombies and finally acquiring a truck, one of them breaks into and hot-wires a car for the other to drive to draw off the zombies. Well why didn’t he do that in the first place with one of the many cars parked nearby, where the zombies weren’t crowding? And how did anyone think that having these things stumbling around the streets making sounds I last heard on Monty Python could be anything less than risible I have no idea.

One first season we did enjoy, and that was Deadwood. I found Calamity Jane an annoying screw-up whose speech I mostly couldn’t understand, but the rest of the characters were excellent, and Ian McShane was superb. The whole setting was a grubbily believable depiction of the lawless West – the whole look of the thing just right, down to the details of clothing, weapons, tools, ways businesses were run, everything. Unfortunately I believe this was a series that fell foul of franchise renewal and terminates abruptly. Still, we’ll buy the rest of what’s available. 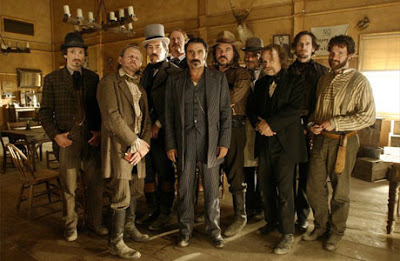 Another we watched was The Borgias. I vaguely remember the old series of this and how much I enjoyed the Caesar character and his pet killer and in this found them both a little disappointing. I also had trouble understanding what many of the characters were saying throughout the first few episodes. Whether this is down to my tinnitus and increasing deafness I don’t know. It may be that they’re trying to be more naturalistic in speech just as many film makers have been with their camera work – you know, the annoying close-ups and shaky camera shots. But after a few episodes I did get hooked and did enjoy it. It’s not quite in the class of The Tudors but certainly we’ll buy the next season. 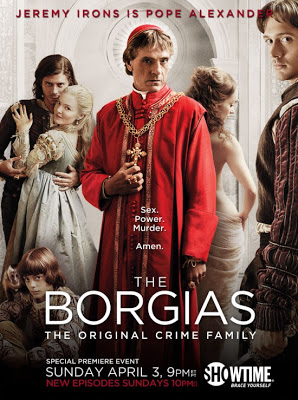 Yesterday, after shopping in Sitia, my labours over the previous days started catching up with me, along with a temperature of over 30 down there and 28 up here. I was rather knackered so confined my work for the day to preparing spare ribs, which we’ve not been able to find here before. Today the temperature at 9.00AM was 22.9C whereas yesterday, at the same time, it was two degrees lower, so it’s going to be a hot one. However, I must get back to my keyboard and do another 2,000 words of the Penny Royal thing, which now stands at 102,721 words.

That’s all for now. Contemplating a swim.