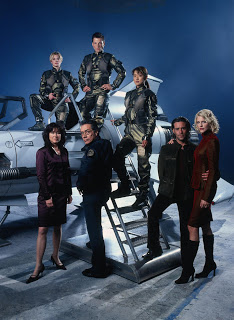 Well, I managed to sit through the first episode of series 3 of Battlestar Galactica, but only managed to get three-quarters of the way through the second episode before I started to lose the will to live. This seems to be a series that is now rapidly disappearing up its own fundament. Maybe it’s because of those in the cast and those producing it make the claim that it ‘isn’t really that science fiction nonesense’. This new production of Battlestar Galactica was originally successful because it produced SF with a sufficient injection of reality, but now it seems the producers and actors have started to take themselves far too seriously. I can see the meetings held before they got to work. “We need more of that stuff that made the series successful, let’s do more issues, more relationships. Let’s try and cut down on the exploding spaceships and robots.” “Yeah, great idea! How about we get topical and do stuff about an occupation, more about religion, maybe some obesity too?” “Damned right. We want people to keep taking this seriously, so we have to cut down on that squids in space nonesense…” I guess we can look forward to future episodes of BSG covering annorexia, homosexuality, racism, the death penalty etc etc. Yup, get it more mainstream. The daft thing is that mainstream doesn’t have to lack action, fun, enjoyment – just take a look at 24. It seems with BSG they’ve gone the route so many writers in the SF world venture along, when they make the assumption that boring = literature. It’s sad, but then I half expected a fuck-up when the franchise got extended.