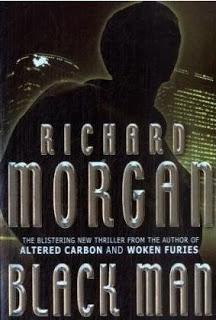 Enjoyable stuff, but perhaps far too heavy on the polemics for some. A couple of times I felt the urge to skip bits, especially some of the long conversations serving as vehicles for social commentary, but I didn’t skip because by then Mr Morgan had hooked me. Also, for someone who very definitely can illustrate the shades of grey in human existence, Morgan goes blind to them when writing about what seem to be his pet hates: religious fundamentalism and right wing politics. Taking a whole lump of America, labelling it ‘Jesusland’ full of ‘Republicans’, and dismissing it as a backward society is somewhat ironic, when his lead and insightful Thirteen is supposed to be more primitive still. I suggest a read-up on some Dawkins about closet Atheism in the Bible Belt. But then who am I to criticise that, my contrast setting is always at the top of the slide. And I have to add that naming a lethal virus ‘Falwell’ had me chuckling.

But though there’s so many pegs in this book to hang negative criticism on, these weren’t enough to drive me away and Morgan kept rescuing it with something like the Raymond Chandler maxim of walking a gunman in through the door. I just knew that shortly the characters would again pick up the plot, we’d be in for some more gritty violence, twists and betrayals. Yeah, that plot seemed to wander a bit, but the characters, the sheer story-telling ability and tight snappy prose kept me nailed. In the end you know you’ve enjoyed a book when, after reading the last line, you think, bugger, I’ve finished it.