Thanks to Sean Price for sending this picture. He was a bit reluctant. I’ll let him explain why.

I was hesitant to send you this picture but then I realized you’re probably more interested to see how well you sell–or not–in various places instead of just getting pictures that give you an ego boost.
(Um, I quite like ego-boosts – Neal) 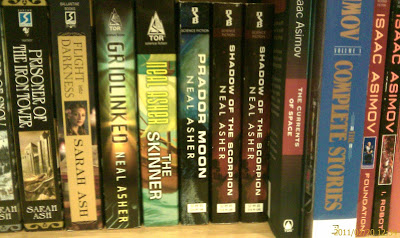 I’m not sure what to make of the meager selection except to attribute it to Border’s financial woes. They’ve filed Chapter 11 and after visiting the store it’s apparent that this was not a sudden decision. When I first discovered your books–several years ago–you had an entire row, hardback and paperbacks included. Now…not so much. However, this isn’t just your books. The pickings are very slim–even for the pulp authors with numerous titles–so I’m guessing that Borders is just not replenishing their stock. Lots and lots of empty shelves…

A fair selection of books from the Best Seller lists but back stock for authors…? It’s like crickets chirping on most of the aisles.

I rarely visit the store anymore since I do the majority of my book buying through Amazon (Kindle) so I hadn’t realized how bad it’s gotten.

I suppose I could visit the Barnes and Nobles store down in Waikiki, but that will have to wait as I rarely have the patience (or willpower) to deal with the traffic situation down that way. 🙂