Skip to content
Well the book sale went well. I’ve been packaging up books for the last couple of days and clearing a bit of space in my loft. The problem of course is that few people want the older cover Macmillan paperbacks that come later in the Cormac series. I’ve got plenty of copies of Brass Man, Polity Agent and Line War. I also have paperback editions of the Tor US releases. But then I guess the problem here is no one knows what is available. I guess I’ll have to go up into my loft again *sigh*.
Another thing I always forget to do is mention the translations. I’ve got a bookcase up there full of them. So, if you read German (plenty of those), Czech, Romanian, Russian, French, Japanese (just a few copies of Cowl) or Portuguese (and I’m sure there are others) and fancy buying a copy in those languages, then get in touch. 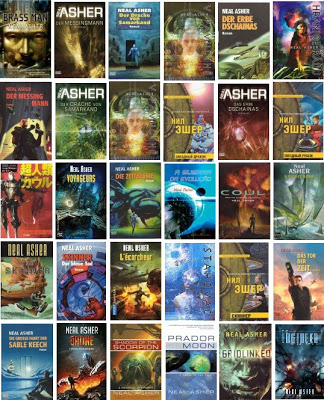 I was thinking back today about my first few books for Macmillan and how I was forever checking my Amazon ratings (well, that hasn’t changed) to check on my ‘success’. But of course a little thought about how people actually buy books and you realise that these things cannot be judged by those initial sales; that initial adrenalin rush when you are the new bright young writer (ho ho). People very infrequently walk into a book shop and pick up a hardback from a new writer; they tend to wander in a year later, perhaps five or ten years later and try a paperback. Hell, I’m only just starting to read Eric Brown and he’s done about 30 books since I read his short story Time Lapsed Man in Interzone back in 1988. It’s a long haul. Still, now, I get contact from people who have just discovered me, who have picked up a discounted paperback (or Kindle edition) and are going on to buy the rest.
Moving on to other things: I was aiming to have done 80,000 words of Penny Royal III before we headed back to Crete. Since I’ve now done 77,000 it seems I’ll be hitting that target. Now I’m wondering if I can get it completed to first draft by then, which gives me plenty of time to iron out the kinks, and ensure all the plot threads are nicely woven together. However, another thought is now occurring … am I going to be able to complete this story in this third book? Could it be that this will be a trilogy (as per Douglas Adams) of four or five books?