Skip to content
This Wednesday’s walk was up Butterfly Gorge and we were aiming for the second church up near a place called Orino, after which we would either walk all the way back down again, or walk a further two kilometres  to the road and call for a lift back down. I’d already heard that it was going to be hot on this day and as Chris, Brian, Kostas and I set out through Koutsouras Park I was already broiling. 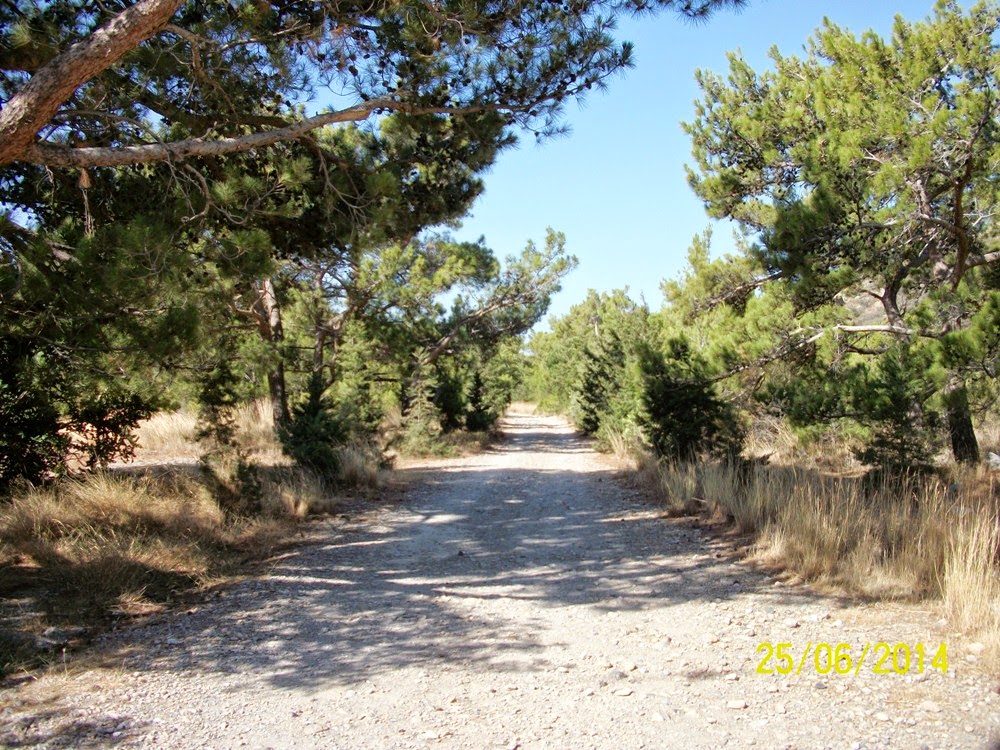 This wasn’t a great walk. Yes, there’s beautiful scenery and interesting stuff to see, but a number of factors killed the pleasure for me and the others. 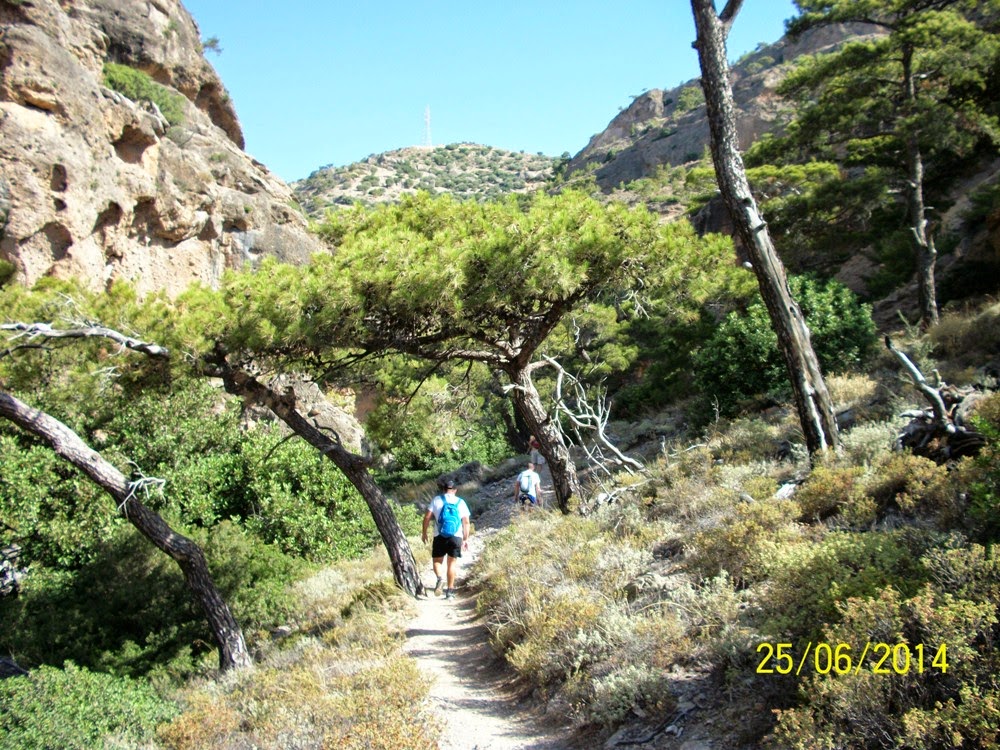 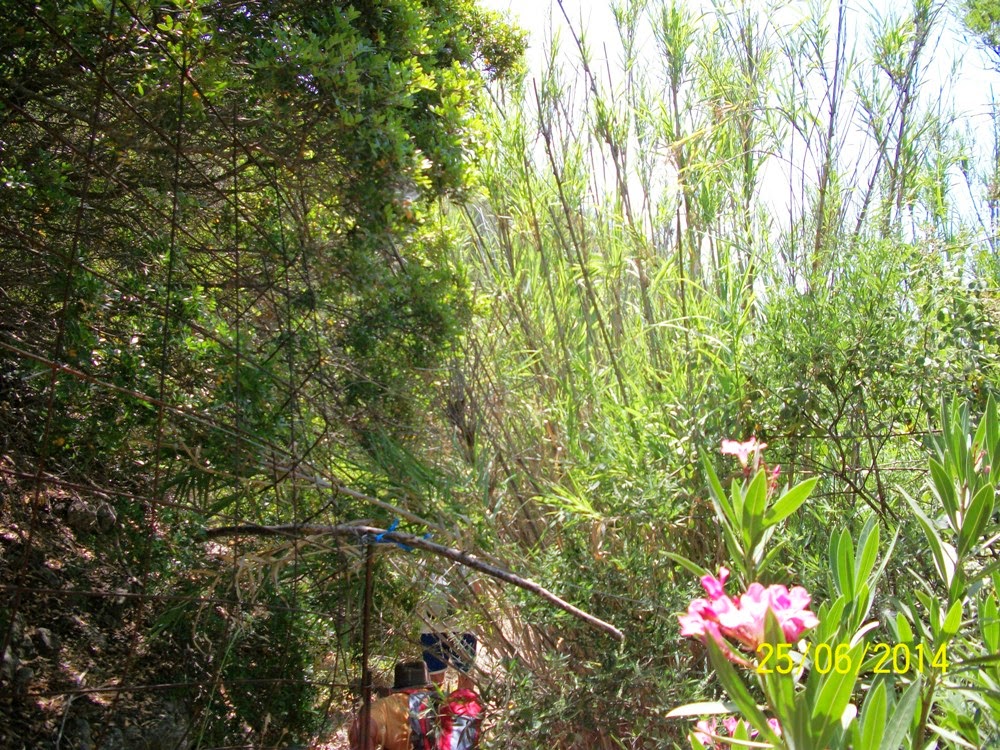 There’s a lot of growth in the gorge which would have been fine if we were walking in the winter. As it was we were in shorts and after stomping through low thorny growths, occasionally going off-piste to end up in Livingstone territory, and pushing through bushes and bamboo to try to locate the trail, there was not one of us who wasn’t leaking the red stuff. 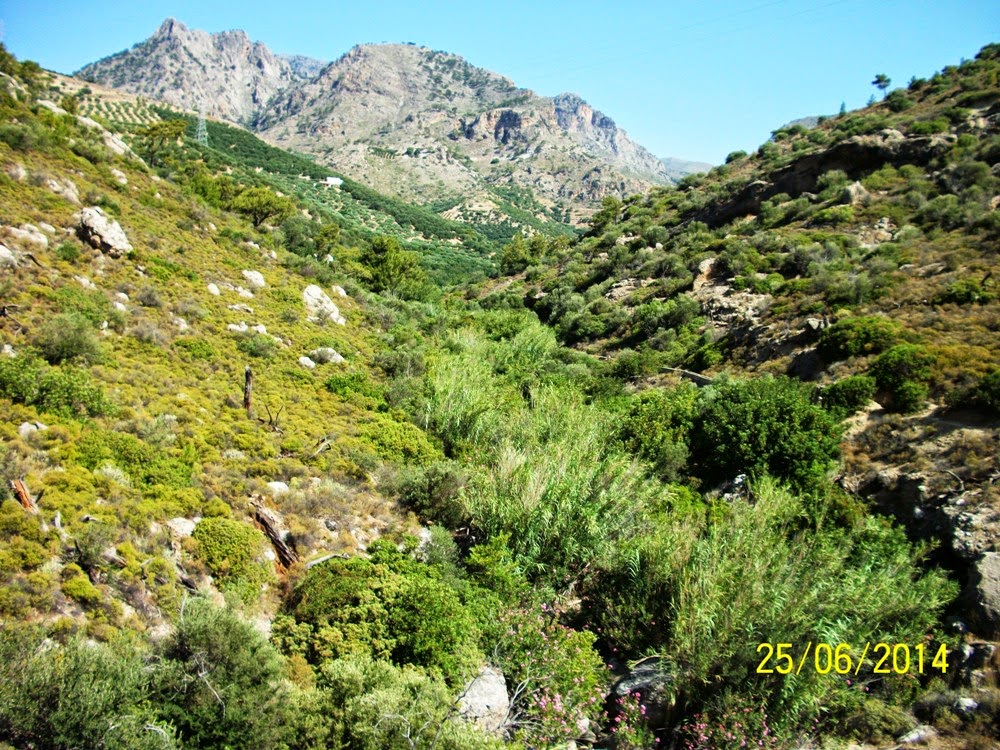 Add in a steadily climbing temperature, my hangover and general bad temper, and this wasn’t a great walk for me. I couldn’t even shed my shirt because of the protection it offered from surrounding growth or, for the same reason, my sunglasses when we were tramping through gloomy areas. Even Brian, ex Royal Navy and ex Glasgow riot cop, was flagging by the time we reached the first church. I think being speared in the back and nearly through his ear by the rough end of a bamboo didn’t do his demeanour any favours either. 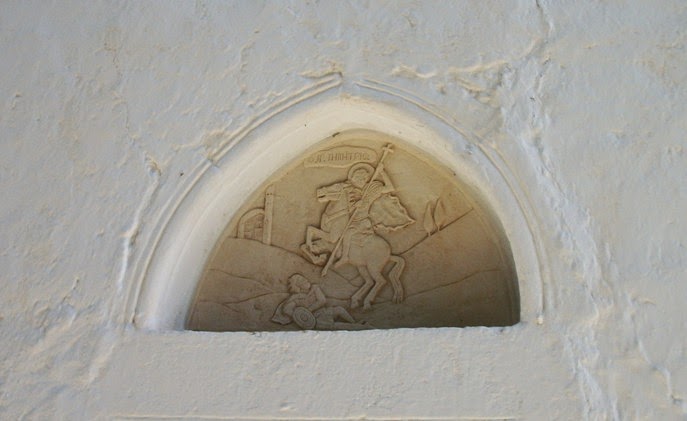 From the first church we tramped onwards, but no one was having any fun, especially when we kept losing the trail. Also, the next stage of the walk was in the open and partially mountain climbing, while we were running out of water and it was very hot. We turned back … except for Mad Dog Kostas who decided he was going to go all the way to the top and try to catch a lift down on the road.
On the way down, and after I nearly keeled over with a dizzy spell, I knew we’d made the right decision, though there was some guilt about allowing Kostas to continue by himself (this started as a walk in the park but certainly wasn’t one later, and such walks can be dangerous). Back down in a bar in Koutsouras Chris remained in contact with Kostas and, as he reached the top of gorge some twenty minutes after we reached the bottom, we set out to pick him up. 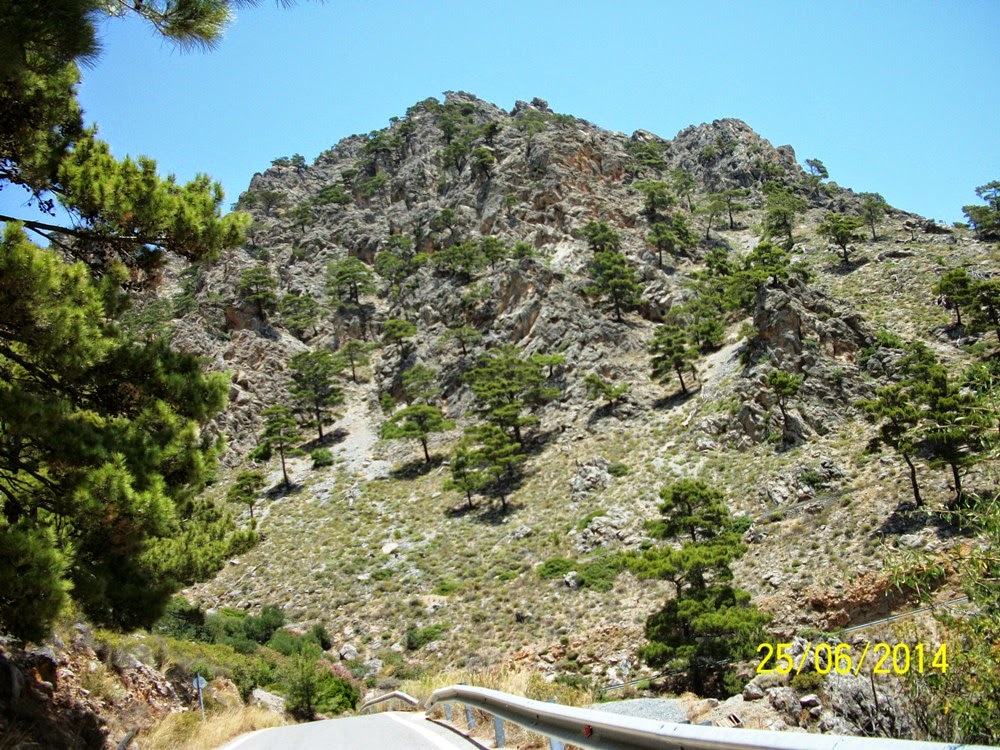 As we drove back to Makrigialos the temperature was such that if you put your arm out the window it was like putting in front of a fan heater. 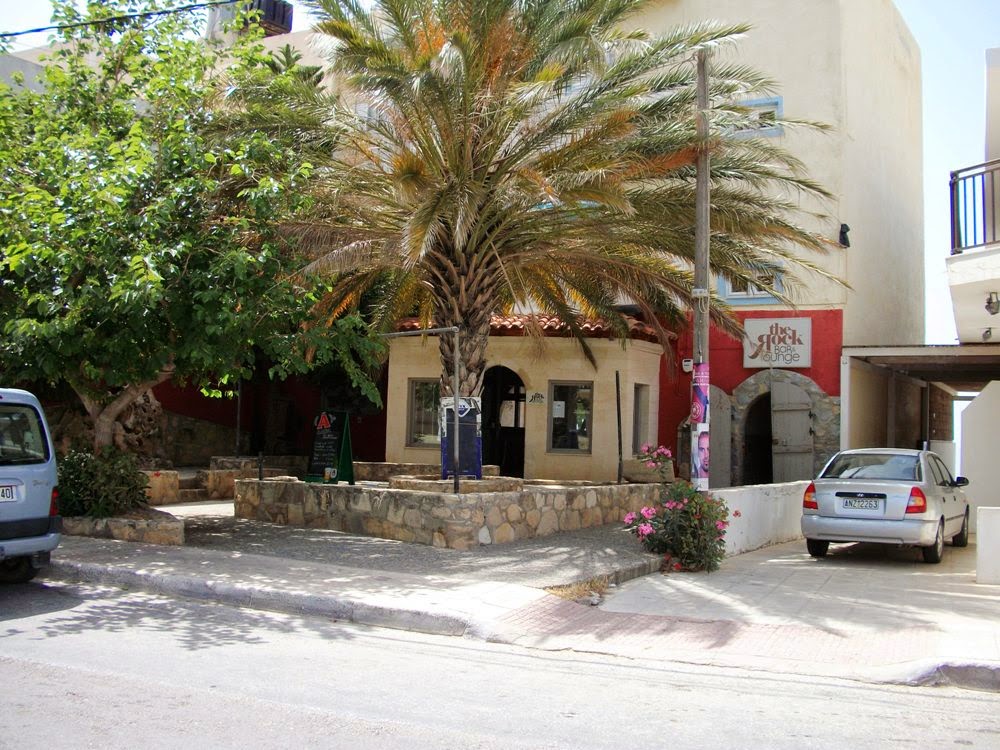 After cooling down a bit in The Rock, with a beer, I looked at the flat calm sea and knew that despite being knackered I had to have a big swim. I did my usual route: to the harbour back along the buoys to the point where the jet skis go in then back to the beach (maybe three-quarters of a mile or a mile). Kostas was there, and is a good swimmer, so I suggested we have a bit of a race around the same circuit at some point. He was a bit blasé about the idea whereupon I made the mistake of making chicken sounds. He went off after his swim and I crashed on the beach. An hour or so later I heard a voice behind me, ‘Hey, poseur.’ Oops.While I had been expecting some race in a day or so he was all, ‘Let’s do it now.’ What the hell. 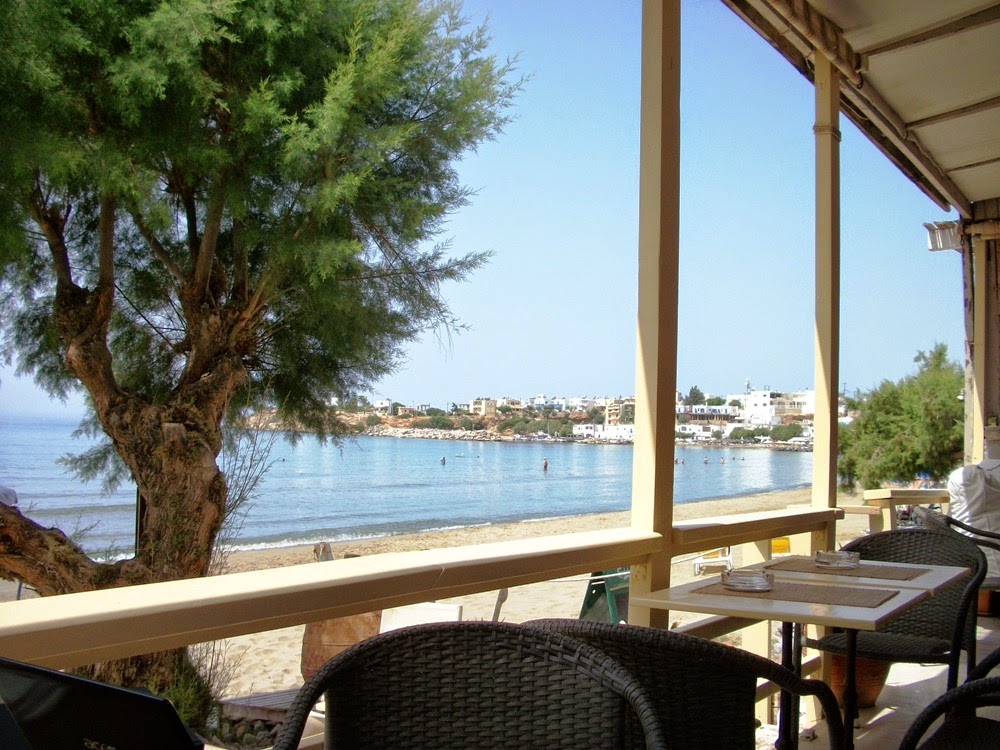 We raced around the circuit again, the winner the one who touched a Carlsberg sign on the beach first. I started off pulling ahead a little but then he accelerated. By the time we reached the harbour he was twenty feet ahead. Later, so he tells me, he saw someone swimming to shore and thought it was me giving up. As it was, I was on the other side of him. Still, he reached the shore about 30 feet ahead of me, sauntered up the beach with a big grin on his face and touched the sign. In my favour I have to point out that I was four beers ahead of him, and am 15 years older…
Next time.
Oh, and in the gorge I only saw one butterfly, so I don’t know what that’s all about.