As James Bond, Sean Connery looked tough, he looked like the kind of guy who could rip off your head and crap down your neck. Lazenby is a vague blur in my mind. To my recollection he had some of that Conneryishness but strayed into the territory of the Milk Tray man. Roger Moore, frankly, looked incapable of ripping the skin off a banana and probably needed a stunt double for any scene where he had to walk fast. Dalton and Brosnan are also vague blurs, the latter looking like he should have been selling Grecian 2000 before moving into a career in televangelism, but then both of these were overshadowed by special effects and an increasingly silly array of gadgets and improbable villains. 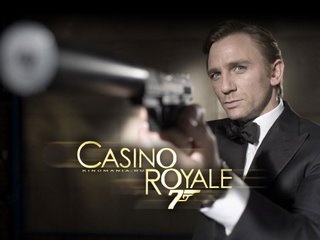 When it became known that Daniel Craig was to play James Bond, there were those in the media who immediately started attacking him. Having seen him in Archangel I thought this all a bit unfair. Now having seen him in Casino Royale I’d like the reporters concerned to be force-fed their own newspapers, anally. Craig was bloody excellent. He can do smooth, but with a nicely thuggish undertone, and has a lot more emotional depth than all the previous Bonds, including Connery. I think he’s the best yet.

It was also good that this Bond movie was without gadgets or ridiculous hitmen with steel teeth. Though updated, it was very true to the book. Are film directors starting to realise that CGI has levelled the special effects playing field and that story and character are once again of prime importance? I hope so.