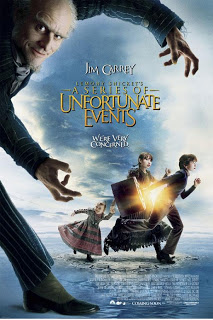 You know I got this really odd feeling whilst I watched the film Lemony Snicket (which came out in 2004) upon viewing the scene with the leeches. My initial reaction was, did the film-makers read The Skinner, which was published in 2002? I mean, the boat, the sea, water you just can’t swim in, carnivorous leeches? Well, no, because the book in A Series of Unfortunate Events that has the leeches in it, called The Wide Window, was published in 2000. The congruence of some ideas amidst writers can sometimes be quite astounding, and I think it all comes about because though people might be writing something they think of as new, they are all always standing on the shoulders of giants (especially in SFF), who are the source of their inspiration.

Recently, whilst sitting down to watch the fourth season of Primeval, I realized I’d missed Season Three so bought a box set of One, Two & Three. I didn’t know what Season Three was about but, catching a hint of the storyline (not sure where) I looked up a review of it and got a feeling similar to that I experienced while watching the leech scene in Lemony Snicket:

…you can really see where most of the budget of the series went as Conner, Danny and Abby jump from anomaly to anomaly following Helen through a series of times, encountering creatures and dinosaurs in each time period they visit…

Eventually tracking Helen down, the team confronts her and finds out that her plan is a lot more insane than first thought. Having figured out what the artefact is and what it does (it’s a sort of future hard drive for anomalies), it’s then revealed that it can be used to go back to a specific point in time, namely 333 (a specific code used by archaeologists when describing the first ‘dig’ where hominids – or proto-humans – were found). The team find that it’s Helen’s intent to go back to the site in Rift Valley and poison the first settlement of hominids, which would mean that humans would not evolve and as such never exist. 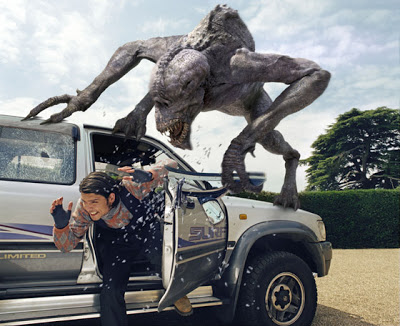 Did the writers of Primeval read Cowl? If they were into time-travel it would have been an good choice since there aren’t many modern time-travel books out there and it was shortlisted for the PKD Award.

But no, I think not. It’s that congruence again showing us that there’s nothing new under the sun. The idea in Primeval was just putting a spin on and ramping up of the idea implicit in the time-travel paradox of, ‘What happen if I go back in time and shoot my grandfather?’ which is what I did in Cowl. Though I must admit the future monster on this car could (at a big stretch) be Cowl himself!