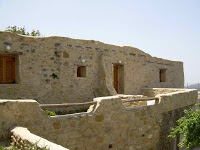 Alright, I feel completely out of the loop at the moment because, for the last four months, me and Caroline have been living on Crete, specifically, living in the house we bought there and trying to solve its numerous problems. Now, before I hear cries of, “Rich fat bastard author!” let me point out a few facts: it is still possible to buy a place out there for less than it would cost to buy a garage in Essex, there’s plenty of people reading this who earn a damned sight more and are worth a damned sight more than us, and we are unencumbered by children, but, most important of all, mine is a job that can be done anywhere in the world. Glad to get that bit out of the way. W 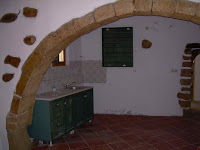 e went to Crete in October aware that we would have plenty to do. The house was provided with a shower, sink and toilet in an untiled bathroom and though there were sockets and light switches in the walls there were no lights – just wires sticking out of the walls. The only furnishings there, were the kitchen sink unit, a cupboard above it, and a set of shelves. The walls had been repainted, covering up the mould, and the water and power were off. First off we stopped in a hotel in Heraklion while visiting our lawyer to collect the deeds and buy 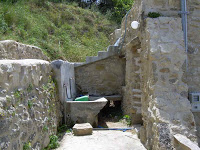 some essentials. Caroline got some bedding and a kettle, whilst my first aim was to get hold of an electric drill, then we drove a rental car on the two hour journey to Eastern Crete. Upon our arrival there we discovered from the agent that the key was in the usual place, under a rock on the window sill, then found out from him where we might be able to get hold of a bed which, making a mockery of deliveries from British firms, turned up that very evening. We were in quite easily, since we were expecting to sleep on liloes that night, and spent the first evening by lamplight sitting on our suitcases, drinking Metaxa.

8 thoughts on “Cretan Adventure: Episode One.”