This one round about the publication date of Dark Intelligence. Amazed to see, down at the bottom, I was still using my Virgin Freespace website then. 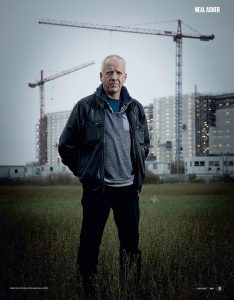 Please introduce yourself, who are you and what do you do?

I’m Neal Asher science fiction writer, one of the big boys in British space opera if you believe some, or a hack who snuck in under the wire if you believe others. But though it’s nice to define myself as a writer, I am and have been other things too. As the biography on my blog says: I’ve been an engineer, barman, skip lorry driver, coalman, boat window manufacturer, contract grass cutter and builder. Now I write science fiction books, and am slowly getting over the feeling that someone is going to find me out, and can call myself a writer without wincing and ducking my head.

I started off being published in the small presses – in the days when most magazines were still printed and posted – getting my first short story published back in 1989. After that I worked my way steadily up the writing ladder to actually be paid for a story some years later, then producing a couple of novellas and an anthology after that. I was taken on in 2000 by Macmillan and have been overproducing for them ever since. Thus far they have published 17 of my books while I’ve also done a few on Kindle myself. My stuff is translated into 10 or so languages, into audio books too, but no film yet.

What first inspired you to start writing?

I have a standard pat answer to that. I’ve always had an interest in all sorts of stuff – chemistry, biology, electronics, art, reading and writing – but it was all a bit scattershot. I realized that to achieve anything in any of them I needed to narrow my focus i.e. I was a Jack of all trades but master of none. I chose writing because it could include an eclectic selection of those other interests. However, this pat answer does not explain the thrill I get when I hear Paperback Writer by the Beatles or the yearning I had when I used to watch the old Melvin Bragg program for which it was the theme tune. I guess I got so much pleasure from my reading of vast amounts of SFF I couldn’t see a better job than being one of those who produced it.

And what attracted you to writing science-fiction?

Science fiction sort of found me. I wanted to write and the next step was publication as vindication of that. I started off writing a fantasy (in pen on paper then typed on an electric typewriter – I have to add that I have actually done real cutting and pasting!) and completed a trilogy plus the first book of another one. These I was sending to big publishers, and they were promptly sending them back. Next researching smaller markets I wrote articles and short stories. I then discovered the SFF small presses and started producing science fiction short stories for them. Meanwhile I wrote a contemporary novel, then I wrote my first SF novellas like Mindgames: Fool’s Mate, The Parasite and The Engineer. Only after these and numerous short stories did I attempt something larger, and that was Gridlinked. I reckon the reason I didn’t start off straight away with science fiction was that I was aware that I did not know enough. Contemporary stuff you write about the extant world, for fantasy you make it all up (though logical consistency is required) while for SF you have to have a pretty wide knowledge of science before you make it all up on the basis of that.

If you could spend a day with anyone from history, who would it be and why?

I’m not really sure that there’s anyone. There are many I’ve admired from afar but I don’t know them. I’m old enough and wise enough to now know that someone can be an icon in the public world but that does not necessarily mean they are not an arsehole in private. I’ll keep my illusions.

Which author do you most admire and why?

I have so many I admire for so many different reasons, or sometimes because of one book. For singular books it’s the likes of T J Bass for Half-Past Human or James Kahn for World Enough & Time (and there are others). Then there are those writers who have never disappointed, whose every book I have read and kept: Terry Pratchett, Iain M Banks, Roger Zelazny, Tanith Lee, Sheri Tepper, C J Cherryh, David Gemmell, Alan Dean Foster … Aaargh! I could just go on and on.

What is your favourite word?

I try not to have a favourite word because, as a writer, I want to use the best word for the job. I was once accused of overusing ‘candent’, but I’m all better now and don’t use it so much.

Where is your happy place?

Usually I would say swimming in the Libyan Sea off the coast of Crete or eking in my garden at my house there. However, my wife Caroline died of bowel cancer this January and right now I don’t have any happy places.

What are you working on at the moment?

Over the last year or so I wrote the first draft of a trilogy concerning and AI called Penny Royal. This entity first appeared in a short story called Alien Archaeology (published in Asimov’s and a Year’s Best anthology) then in my book The Technician. This trilogy has the overall title of Transformations and the books are: Dark Intelligence, Factory Station Room 101 and Spear & Spine. Presently I’m editing them.

Tell us about your latest work and how we can find out more.

The next one to appear will be the first mentioned above – scheduled to be published next February. The last book I had published was Jupiter War, the last in the Owner trilogy, the prior books being The Departure and Zero Point. If you want to find out more about these books and all my others there’s plenty of information on my website http://freespace.virgin.net/n.asher There’s also plenty of stuff on my blog at http://theskinner.blogspot.com I can also be found on facebook at neal.asher or on Twitter @nealasher And of course my stuff can be found in all good book stores online or on the high street.