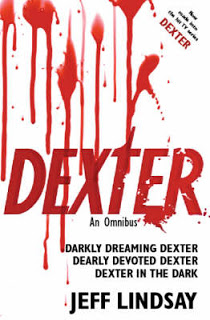 The language of the first page of this hauled me up, but I persevered and was soon in territory I recognized from the excellent TV series. I was a bit dubious about the somewhat camp depiction of Dexter and the emphasis on his ‘Dark Passenger’ which only kicked in in the TV series when he was pretending to have a drugs habit, both as an alibi with Rita and a way to put Doakes off the scent. I really enjoyed the first two books of this, noting the differences and being quite happy with them – there were quite simply things that happened in this only suitable an X classification and would have cut down on the success of the TV series. The last book I hated. Lindsay took Dexter’s ‘Dark Passenger’ into supernatural territory, Dexter himself became a soppy ineffectual mess, and I felt it was wrong wrong wrong.

Thing is, whilst there were a couple of really enjoyable books here, and the idea of Dexter is all down to Lindsay, I find the TV series a lot better. I think that the TV version nailed the essence of it, of Dexter, which was in the first two books, and definitely not in the last one. You may think it odd me feeling that straying into fantastical territory was the wrong thing to do here, if you do, then go read my post about UFOs again.