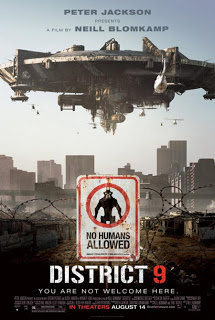 So I finally got round to watching District 9 last night. I did enjoy it, but with reservations. Yes, the way of presenting the story with news clips, segments from interviews and CCTV shots was interesting, but jarring at first – took a little getting used to. The aliens themselves were okay, but really, I’ve yet to see truly alien aliens anywhere other than the film of that name (and even they were a bit too anthropomorphic).
Some usual Hollywood tropes and issues here. Why did the alien spaceship choose to park over Johannesburg? Because characters speaking with an Afrikaans accent is sure to raise the spectre of racism, which was rather unsubtle. Admittedly Blomkamp was brave giving the ‘Nigerians’ such a bad guy role. And of course, the arch bad guys role has to be taken by the big corporation. Now where have I seen that before? Oh yeah, Avatar, all the Alien films, Blade Runner, Terminator (initially) – in fact, how often is it not the big evil corporation that’s ultimately to blame?
We had here a spin on the idea of giving beads to the natives in exchange for something more valuable, but that the beads were cans of cat-food and the natives were aliens just transported from a starship I found plain silly. Why were they starving? Here we have a race capable of zipping across the light-years in their starship, their whole technology based on biotech, yet they are incapable of feeding themselves?
I have to wonder how these aliens, starving and dying aboard their spaceship, were transported to the ground, without anyone noticing a large number of big fuck-off Men in Black guns, along with an enormous alien military exoskeleton. I also have to wonder why the alien spaceship, hanging in the sky on some sort of antigravity and empty of the prawns themselves, wasn’t crawling with reverse engineering experts, scientists, in fact some massive research effort. And I also have to wonder why the shuttle dropped to the ground and was concealed; why it didn’t stay where it was. Starvation again? So what were the father and son prawn going to eat during their at least a year and half journey back home? Maybe a scene was cut showing the shuttle packed with cans of cat food.

Suffice to say that we have some great scenes here – the action scenes are particularly good – but the whole, if you just think about it for a little while, doesn’t stand up to inspection.