Skip to content
Anyone who has frequented Forbidden Planet London in the past, either to buy books or sign them, will probably be familiar with Danie Ware. Good on you Danie for keeping your own writing under your hat and not bending my ear about it. Now I’ve just read an uncorrected proof copy of her book. 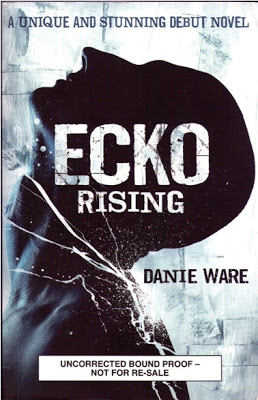 I found Ecko Rising a tad confusing at first but intriguing enough to keep me reading and the slowly introduced back-story began to clear my confusion. Being a roll-up smoker myself I could have done with a little more of that background/back-story earlier rather than so much focus on how a character called Lugan smokes his roll-ups. Next I was getting much more into it with Ecko on the move, but then the switch from an SF scenario to what is effectively a fantasy one (and on flicking ahead to discover the fantasy stuff seems to be most of the book) nearly lost me. It shouldn’t have really since any jerk reading the cover will see the words ‘cross genre’. However, a chapter titled ‘The Monument’ dragged me back in and I started really enjoying it.

Okay, you all know me well enough to know I won’t post a review of a book I didn’t enjoy. Generally I don’t finish such books so reviewing them would be unfair. This book had its frustrations for me like: stop moping and bloody do something will you Ecko, the way characters are introduced making me feel I should have read them in a book before this and some generally confusing scenes/conversations that just didn’t seem to go anywhere. But, the idea of the contemporary (well, near future) character dropped into a fantasy world that might be a virtual reality is a good one and well done. I like the contrast between fantasy characters and the smart-talking technologically upgraded Ecko. I liked the way that the reality of wounds in a spear and hack-em’ world was depicted. On balance there was a hell of a lot here to like, and I motored through this book. It’s a page-turner and I’ll be getting hold of the next one.