It’s an odd experience for me to again read The Parasite while I’m editing it. So much has changed. My English is a lot smoother now and I know how to write sentences that are longer than ten words. I more clearly see the logical connections in the flow of the plot and my paragraphs are … tidier. But beyond the English other differences strike me. 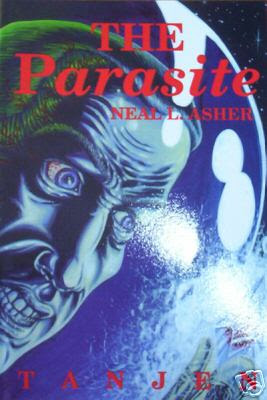 Here was a novella I wrote when I simply did not think to question the idea, often promulgated, that the real bad guys are from the corporation or the company. Think about films like Alien and the recent Smurf movie, think about other films and TV you’ve seen and books you’ve read. When the be-suited killers start turning up they are usually working to cover up the dirty doings of some evil capitalists.

This was also written at a time when I unquestioningly accepted global warming as a threat, hence we have ‘Maldon Island’ (presently an inland town), a one-metre sea-level rise and a requirement for massive sea-level defences. I’ve changed all that now, so if you wish to read it you’ll have to get hold of the old Tanjen copy depicted.

I also bought into the idea of ‘good’ multinational organisations rather than such working for their own advantage, hence the good guys here working for World Health. When I wrote this I was teetering on the edge of but had not yet fallen into the pit of cynical despond. This sort of reminds me that when I was 16 and working I thought ‘I’m a grown up now’, but then about ten years later I looked back on that callow youth and chuckled at his naivety, then ten years after that I looked back at that ‘boy’ in his mid-twenties and thought the same, and so it has been ever since. I suspect we all do this right up to coffin-dodging territory.

Noticeable repetitions in the novella, or rather, bits I borrowed from it and used in my Macmillan books: cloned CIA killers (Tack in Cowl), snuff tapes uploaded to a Golem’s mind (Brass Man), a parasite strengthening its host (The Skinner of course), questions about what it means to be human, and about free-will (All of them)… and plenty more besides. I also noticed I’d named a character here ‘Langstrom’ then did the same in The Departure. I have to wonder at the subconscious source of that name, since the gap between the books has to be at least 15 years. I’ve now changed that name in the updated version of The Parasite.