Terry Pratchett once took the piss out of ‘quantum’ in that it explains everything and it can do anything. Another one for modern SF is ‘nano-technology’ and both are essentially equivalent to abracadabra. But go back the over 70 years to when Empire of the Atom was written and we have just entered the atomic age, and of course ‘atomic’ is the word. Atomic ‘stuff’ can do anything and it is like magic. Only a few physicists knew any better, so the ridiculous ‘science’ of this escaped scrutiny and now with, as Aldiss once described his collection STAN, that ‘whiff of antiquity’, this book is sliding into fantasy. Add in the armies and sword waving battles on Earth, Venus and Mars that come straight out of Edgar Rice Burroughs and it has firmly arrived. Yet, despite all that, I enjoyed the wry observation of human nature, the intrigue and that most important element of all: the story telling. 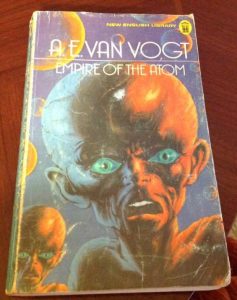