More on that reactor I posted about previously. Apparently it’s not ‘cold fusion’. Full interview is here.

[The following interview of Andrea Rossi by blogger Daniele Passerini was originally published on Jan. 25 and is reprinted courtesy of Ventidue Passi D’amore e Dintorni. The English translation is provided courtesy of Shirakawa Akira. Passerini also prefaced the interview with his own comments (not translated here) in a short introduction titled “Toward Infinite Energy and Beyond.” Rossi and Passerini have confirmed to New Energy Times that this English translation is factually and linguistically correct.] 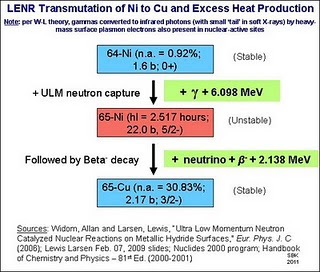 PASSERINI. Good day Engineer Rossi, I thank you for accepting this interview. Everybody is asking themselves how you managed to perfect your Energy Catalyzer? Somebody even suspects that you stole the idea, for example, from Professor [Francesco] Piantelli from the University of Siena, who in the 1990s worked together with Professor [Sergio] Focardi on “cold fusion” research. Could you explain us where, why, how and when you started working on this project?

ROSSI. I started in 1987. As the facts show, my process strongly differs from previous efforts: Nobody has managed to manufacture a working device so far. Facts count, not words.

PASSERINI. 1987 would mean two years before the strongly disputed Pons-Fleischmann experiment. Recently, you stated that it’s not proper to define the reaction occurring in your catalyzer as “cold fusion” and that it’s more correct, at the moment, to generically define it as a weak [force] nuclear reaction – in other words, low energy, or LENR. Are you telling us that you went on a different road, parallel to that of “cold fusion” research?

ROSSI. Exactly. In fact, mine is not “cold fusion” but weak [force] nuclear reactions. Pons and Fleischmann did heavy-water electrolysis with a palladium cathode and a platinum anode. I don’t do electrolysis, I don’t use either platinum or palladium and I use temperatures that manage to melt nickel.