Skip to content
A number of years ago, like most people heading into their 50s, I found that reading was starting to become difficult. Mostly it was a light thing. I picked up some +1.5 reading glasses which I used when the light was crappy and that is how it has always been. I could read in good light even when I moved to +2.5 and then admitted that my eyes still weren’t right and had them checked. About this time I suffered from a lot of styes mostly in one eye and it turned out that eye had developed astigmatism. Also it seemed my body had adjusted to the age-related inflexibility of my eye’s lenses by giving me one eye for reading and one for distance. 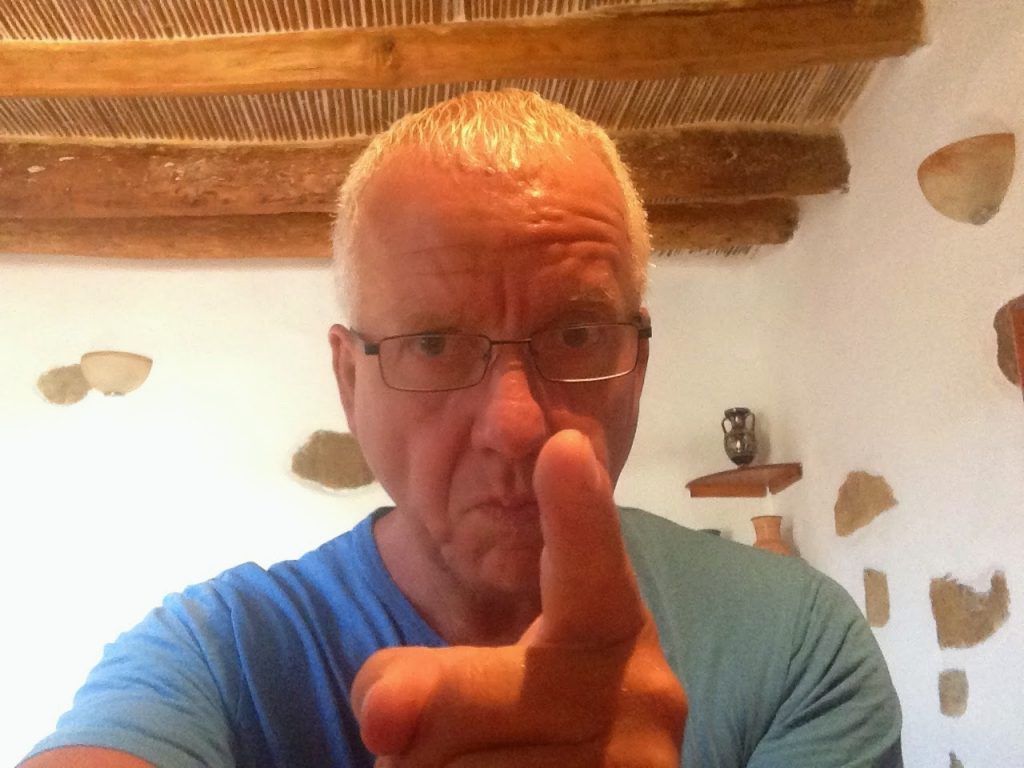 Because Caroline had had good results from laser eye surgery I went to see what could be done. Turns out that I had a choice: I could have my eyes lasered so I needed glasses only for reading or alternatively only for distance. Since I did not yet consider my distance vision sufficiently crappy I was a bit reluctant. Another alternative, at much higher cost, was refractive lens replacement. I booked to see the eye surgeon next time he was in the clinic but the appointment was cancelled because he wasn’t coming, so I just let it go. This was in 2012.

Over the ensuing years my vision worsened. The disparity between my eyes made it difficult to watch TV – I could read the time on the DVD player with one eye but not the other – and to drive at night. I ordered some glasses over the internet using my prescription but with the reading element taken off. These I used for driving at night, and then started to use for driving during the day. My eyes felt perpetually out of balance and tired. 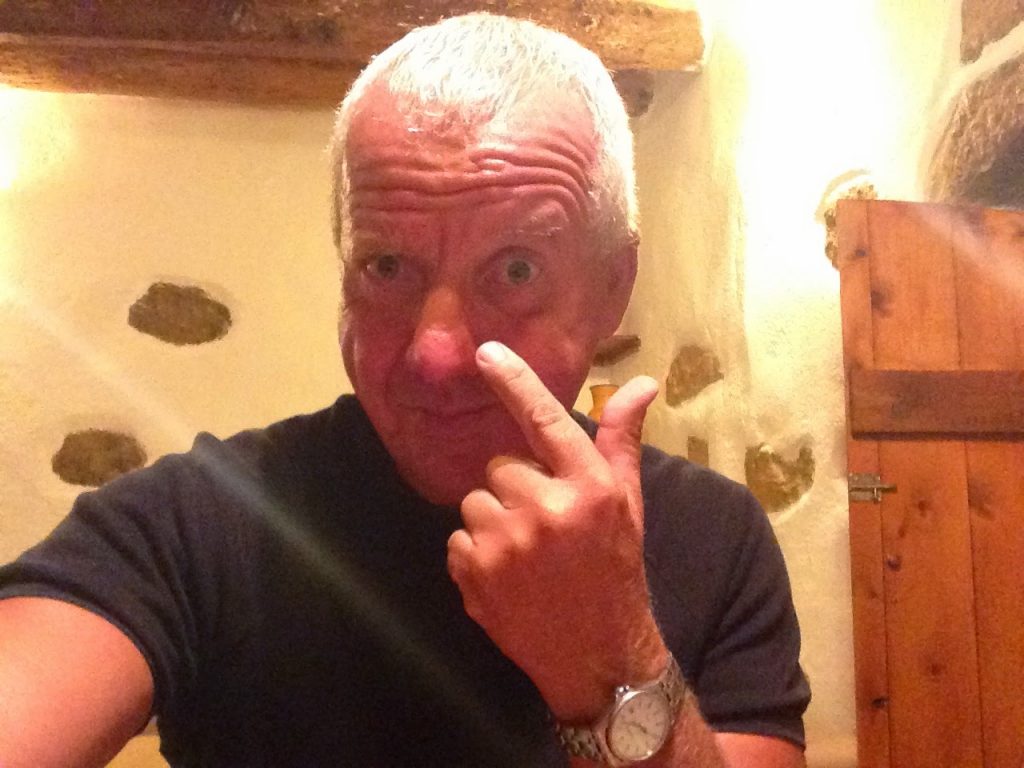 Meanwhile, through my science reading, I learned about the new multi-focus lenses now being used in refractive lens replacement. So I decided to look into it again. I booked an appointment with Ultralase – where Caroline went – and learned that the clinic in Chelmsford had closed down. It turns out that Ultralase was bought out by Optimax and some clinics closed during the reorganisation. I went to a place in Southend and the results were much as before for laser, but by this time I was thinking what the hell, I’ll have the replacement lenses. The success rate for 20/20 vision is well into the upper 90%s and most failures can be corrected anyway. I am also aware that nothing is 100% and that usually the failures in any kind of surgery are with those who have something very seriously wrong or other health problems. Also the operation was a lot cheaper than previously quoted. And, in the end, an SF writer with cyborg eyes? Gotta be done. I paid the deposit and booked in.

The operations were to be in Harley Street – first one eye on the 6th February with a check-up in Southend on the 9th, second on the 13th with a check-up on the 14th (this time in London). I’ve now had the operation on my first eye. I was nervous about this and still wondering a little if I was doing the right thing. Were my eyes sufficiently bad for this? Would the result be a marked improvement or sort out the vision problems I had but just replace them with other drawbacks? I had read about problems with halos and adjustment to the change. In respect of eyes being sufficiently bad (or ripe for change) I learned from the surgeon that the earlier the better. The harder the lenses are when removed the higher the likelihood of damage to the eye during the operation.

After a talk with the surgeon and the signing of some ass-covering forms I sat in a room, had a x penned on my forehead to mark the eye to be operated on and drops put in to open the pupil to begin numbing it. I then went into the theatre where more drops were added and then some sticky fabric was used to hold my eyelids open. I was a bit worried because my eye did not feel numb at all. I could see nothing but three glaring lights. A nurse offered to hold my hand but I manned up and folded them on my chest. The surgeon began furtling about in my eye and I could see movement. He then told me the next bit was going to sting. It did. I could feel my eye being cut, but only briefly. More furtling ensued – painless – and then the operation came to an end. Briefly I noticed something: I could see individual diodes in two of those lights. Next an eye shield went on and I went into recovery – just a blood pressure check and five minutes sitting chatting to a nurse – then I headed off  home. In all I would classify this operation as much less traumatic than having a filling at the dentist. 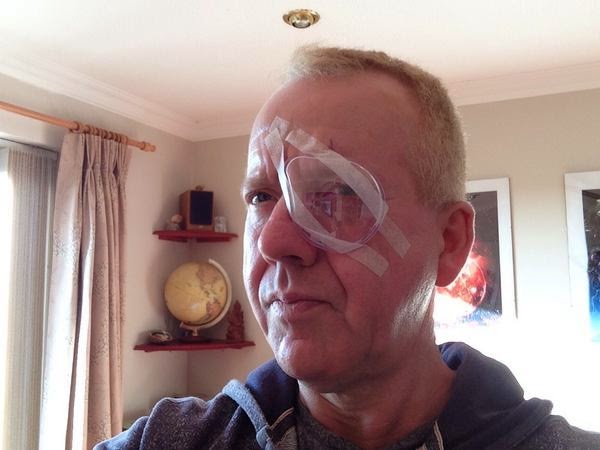 My vision was heavily blurred and it was more comfortable to keep my eye closed. My eye felt as it does when you have a stye. I also felt quite tired afterwards – maybe stress. The blur remained throughout the day but even through it I can read the time on my DVD player, which I could do before with that eye. At one point I did notice halos but they’re not much of a bother. They only seem to be there when there is a bright light nearby. During daylight there is no sign of them. The blur reduces each time I put my eye drops in – two lots 4 times a day consisting of an antibiotic and an anti-inflammatory. Now, on the second day the blur has reduced by half, the eye more comfortable and I’m keeping it open more. I’ve popped a lens out of my reading glasses since wearing them makes the blur in that eye worse. 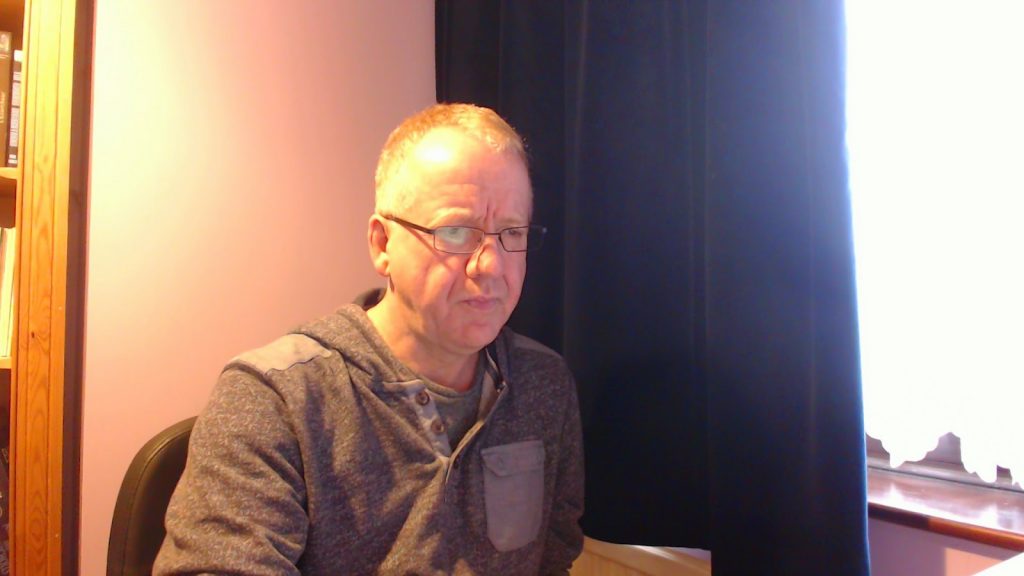 I’ll do some more blog posts about this later. I might even take a camera to my next operation to see if it’s possible to get a few pictures…