Skip to content
Watching Elon Musk’s Falcon Heavy launch into space, seeing two of its boosters land with the kind of precision that looked like CGI and seeing, FFS, a Tesla car swinging round Earth with a manikin in the driver’s seat, had me the most excited about space travel and exploration I’ve been for an age. Why is this important? The rockets are reusable, the cost is coming down at an astounding rate but, most importantly, Musk is showing that space exploration and travel can be carried out by private sector enterprise. In fact it can be carried out better. We no longer have to wait for moribund, government-controlled bureaucratic behemoths like NASA to get us into space.
https://youtu.be/u0-pfzKbh2k
This launch also had another effect on me illustrated by a tweet I saw last night. I paraphrase: ‘There’s a Tesla car heading to Mars and you’re still on about Trump?’ In one evening I completely lost interest in politics and still feel that way this morning (but it will inevitably return). 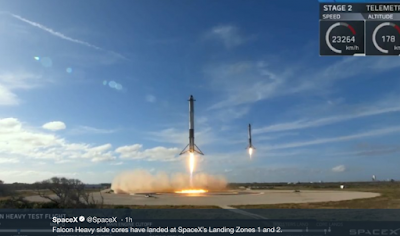 There was one negative in this and that was the third booster failure. One of its engines failed to ignite (some fuel problem?) and it missed the drone ship to plummet into the sea at hundreds of miles an hour. But even this is a relatively minor mishap in something of this scale. Firstly, other rockets aren’t even reusable and, consequently, are a damned sight more expensive (“The nearest peer competitor is the Delta 4 Heavy at roughly half the thrust and from four to as much as ten times the cost.”). Secondly, it turns out that these rockets won’t be used again anyway since Spacex has the next iteration ready (I think). 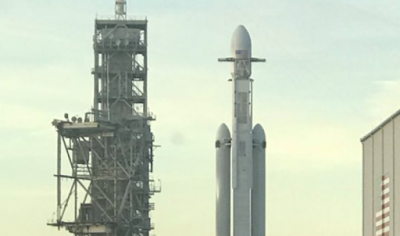 There have been naysayers. Some feel that Musk should have sent some scientific instrument rather than a car, and that this was a crass publicity stunt. They have obviously failed to understand the financial aspect of the publicity generated by this stunt. Doubtless their inclination is for science under the aegis of big government, and they find private enterprise distasteful. Another, apparently on TV this morning (I didn’t see this since I don’t have a TV licence and therefore don’t watch live TV) was bemoaning the ‘pollution’ of space and of Mars by sending a car up. Beside the fact that the car will not actually end up on Mars, this is quite ridiculous politically correct ‘environmentally conscious’ virtue signaling. It also shows a complete failure to understand the barren hostile immensity beyond Earth. Seriously, fuck off. 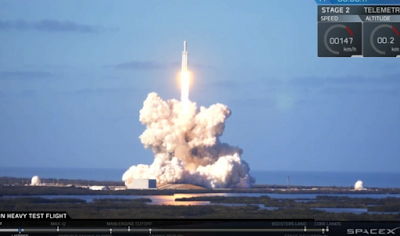 Elon Musk is a man with a dream and he is not buggering about in achieving it. He wants us up in space, constantly, on Mars, on the moon and elsewhere. I love too that he is obviously also a lover of science fiction. Culture ship names and that ‘Don’t Panic’ on the dash screen of the Tesla demonstrate this. And his dream, in the end, has revitalized the dream of space exploration for us all.