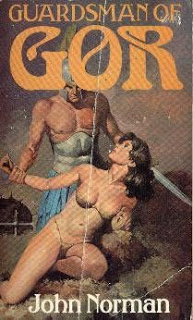 Here’s a little summation of just a few opinions about fantasy covers. Some hardened SF readers simply don’t want to know, an opinion summed up by Roger Fourt: Anyone wielding shiny sacred weapons, multiple planets/moons in the background, improbable waterfalls, ludicrous cities perched atop unscalable peaks. In fact, fantasy covers are generally off-putting, along with their trite, largely write-by-numbers storylines and nerdy pubescant D&D followers. Gives SF a bad rap by association.
Those that do want to know object to depictions that bear either little relation to what the books contains, or are, frankly, embarrassing. On covers Bob Lock doesn’t like fairies, or the WOT series as all the characters seem not to scale. They look as if they are riding Shetland ponies, nothing like how I imagined them from their descriptions, whilst Stuart McMillan opines, heaving bosoms and demure damsels keep my wallet *in* my pocket. Saying that, great chested men with giant weapons are equally a turn-off. Andy Plumbly and Chuck MacKenzie respectively don’t like the typical bright colours and a generic character on the front and ‘same old’ sword & sandals designs (think the ‘Gor’ books).
And then Andi Marment and Chuck lean towards fantasy down and dirty like weaveworld or imagica, none of that wheel of time bobbins or fantasy books (athough I read very little fantasy) with cities on the cover, but that’s largely due to having read brilliant ‘city’ fantasies by China Mieville and Alan Campbell.
So what can be learned from all this? What some like and dislike about a cover is usually informed by their opinion of what is inside the book. In the end, making an exception of those embarrassed about their ‘guilty pleasure’, the truer the cover is to the book’s contents the better. But then we all knew that anyway.
Of course, the sample of opinions here doesn’t mean a lot. What would all those 10 to 18 year old boys think of the John Norman cover here? I certainly still like the lurid covers on some of my books and, had I avoided such covers, my reading, and enjoyable reading, throughout my life would have been cut down by about 80%.