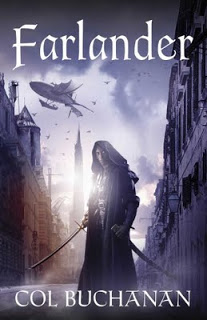 Having attempted to read a couple of fantasy books within the last few months, and having failed, I was beginning to wonder if I was going off fantasy. Those other books felt derivative, laughably serious about what to me seemed plain silly. Maybe I had lost that vital ability to ‘suspend disbelief’ with fantasy? However, reading Col Buchanan’s Farlander I realised that no, I wasn’t going off fantasy, I’d just gone off the stuff that failed to engage me. I would still be able to enjoy something like Alan Campbell’s Scar Night, or anything by Gemmel, or Zelazny, or any number of excellent books I’d read before.

I’m a lot less tolerant nowadays. Life is too short to put up with a book that doesn’t come up with the goods. I know that if I haven’t been hooked within the first few pages it’s unlikely to happen, and if I’m still uninterested by the end of the first chapter it’s time to put the book aside. Two pages in to Farlander I was hooked and a chapter in I knew I wouldn’t be putting it aside.

Considering previous discussions about covers here I have to say that the picture on the front was too reminiscent of Star Wars and, when I discovered that the disposable soldiers of the Empire of Mann wore white armour and that the monkish swordsman Ash would be taking on an apprentice, I was a tad dubious. But the writing kept me engaged; kept me wanting to know more. As I continued to read I felt that Buchanan was attracted to fantasy toys, picking them up and giving them a shake, then realising they weren’t good enough for the story he wanted to tell, and discarding them. Throughout this there are scenes, tropes, characters and influences from other works – here a bit of Gene Wolfe’s Shadow of the Torturer, there some definite Gemmel, over there a taste even of Robert E Howard, and as ever a little bit of urban fantasy too – but in the end Buchanan makes them his own.

Farlander is the first book of a series, but reads well enough on its own. I’ll certainly be reading the next book, for I have a feeling that it’s going to be even better. Nice one Mr Buchanan.