Skip to content
Assuming that I’m stranded alone, if I were to choose five books for a desert island, I would want books with humanistic reflection and characters which feel life-like, where they are set in a detailed, almost corporeal setting beyond that of a beautiful, yet monotonous sand and surf. 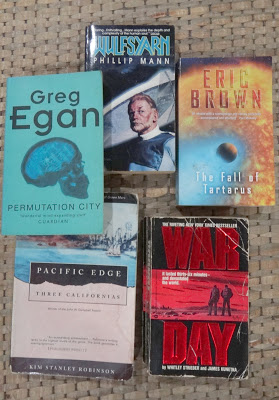 1) The Fall of Tartarus by Eric Brown
Eric Brown writes amazingly humanistic science fiction and this novel was my first exposure to his work. The setting is on a planet soon to become engulfed by an expanding sun, so perhaps the constant heat depicted here may be a tad of a turn off, but the eight stories ooze a deep understanding of how humans confront loss and dying. So, for the sheer sake of experiencing empathy through a novel, The Fall of Tartarus is a must.

2) Warday by Whitley Strieber and James Kunetka
Again, maybe this type of trope is little depressing for a hermetic long-stay on a desert island, but it’s so very easy to lose yourself in the details of Warday. The journalistic details are captivating and the journey across the states in search of additional facts and how fellow Americans are dealing with the effects of nuclear disaster is, again, humanistic in nature.

3) Three Californias: Pacific Edge by Kim Stanley Robinson
The Three Californias series isn’t a well-known KSR work, but they each exhibit a clear projection for the possible future of the state of California. Pacific Edge is a notable book in my 450 book library because it contains the one character I ever fell in love with–Ramona. For the sake of experiencing Ramona through the eyes of her young love Kev, this book must be by my side.

4) Permutation City by Greg Egan
Not humanistic whatsoever, but it’s one of those books which really blow your mind. The depth of complexity and extra-corporeality sets my mind tingling. I think this kind of distraction would trump the mundaneness of coconuts and crabs.

5) Wulfsyarn by Phillip Mann
This just may be the crème de la crème of humanistic science fiction, watching through the eye of an “autoscribe” as it reconstructs the story of how a captain lost his entire crew on its maiden voyage. The grassroots feel to the novel tugs as the heart strings as the reader vicariously experiences the rise and fall of the great Captain Wilberfoss.