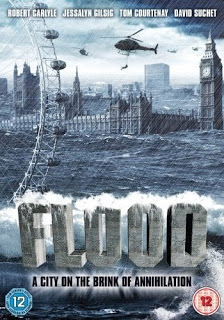 Over the last two days we sat and watched a film in two parts called Flood, starring amongst others Robert Carlyle and David Suchet. The first half was good (everyone enjoys a disaster movie) but for the latest fashion of, “Let’s shake the camera about to make it appear more exciting,” then the second half lapsed into bathos through to plain daft at the end. Robert Carlyle gets all emotional with his ex-wife and his estranged father, Tom Courtenay, who in turn sacrifices himself at the end to save London in a piece of televisual silliness. Yeah, you’re going underwater into a room that will close off and trap you in there until the city is saved, well, take some more air bottles you prick. But I guess the thing that completely shafted the whole film for me was that, Courtenay, the hero who sacrifices himself, was a climate modeller: “I inserted your data into my model with the result that I, and only I, know that disaster is on the way.” Not particularly credible now we know how climate models don’t work. And not particularly credible that a climate modeller would be seen anywhere away from a computer or press conference and actually out in the ‘environment’.