On (I think) April 2nd last year this happened:

While we sat in the sunshine sipping cold beers the earth shrugged, grumbled then continued shaking. Some people ran out into the street – one Greek woman all hysterical and crossing herself and doubtless praying to the god who chucks tsunamis about. We remained seated, since we weren’t anywhere anything was going to fall on us, and watched the street lamps whipping about like reeds and nearby trees thrashing. I’ve experienced quakes here before but never seen that.

As far as I recollect this was an earthquake of 6.3 on the Richter scale. On April 1st and May 27th fracking in Lancashire caused, respectively quakes of 2.3 and 1.4, and immediately the media and green hairshirts were shouting for a moratorium on this country accessing an energy supply that might just drag us out of the pit (in fact, do a search of ‘fracking’ and yu get pages and pages of hysteria). So let’s take a look at the Richter scale: 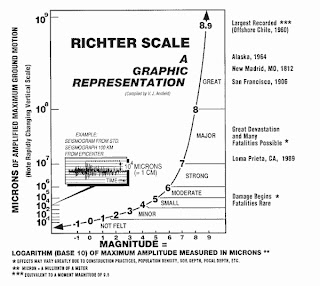 Here is the simplest explanation of it:

A logarithmic scale used to express the total amount of energy released by an earthquake. Its values typically fall between 0 and 9, with each increase of 1 representing a 10-fold increase in energy.

So, the earthquake I experienced in Crete was roughly 10,000 times stronger than the strongest one caused by fracking. In fact, as you can see from the graph the lowest one is in the region of ‘not felt’ and the highest one is ‘minor’.

Now go read Counting Cats and the comments. This one I find particularly illuminating;

A butterfly flapping its wings in Mexico will cause small seismic tremors in Lancashire. Even the lefty dolts at wikipedia know that earthquakes under 2.0 occur “continuously” and those of 2.0-2.9 are ‘Generally not felt, but recorded.’ with 1.3 million of them per year.

Devil’s Kitchen also has something to say…

Update
Here’s a link to an interesting report passed onto me. If this sort of stuff is of interest to you then read it carefully and consider the words ‘correlation is not causation’, or even, ‘which came first the chicken or the egg?’ Remember too that one of the big criticisms of the alarmist film ‘Gaslands’ was that people had methane in their water supply before any fracking.