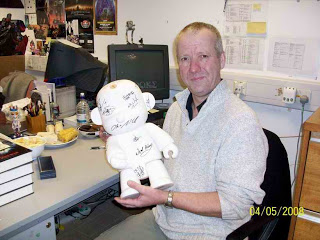 Thanks to all at Forbidden Planet in Shaftesbury Avenue for having me there to sign some books. Blimey, occasionally there was even a queue forming (two people) but, as always, it’s not the number of people turning up on the day, but the huge stack of books I sign that disappears over the ensuing year. Whilst I was there Danie Ware got me to sign this odd thing (rather like an adipose from the recent Dr Who) called a Monqee (I’m guessing that calling it Monkey might result in a certain tea company getting annoyed). This object, currently being covered with signatures rather like the fat boy’s face in the the run-up to that ‘White’ series, is to be auctioned in aid of the Match it for Pratchett appeal You can find more about it on Danie’s blog here. After the signing I as usual slipped off round to the Angel and drank far too much before staggering off home. It was all pretty enjoyable, though Sunday’s depressive post alcohol effects weren’t very nice at all. Thanks to Peter Lavery and Macmillan for buying some of my books at the shop to help replace the ones I didn’t receive! Nice also to have various members of my family along, Simon Kavanagh doing a passable impression of David Tennant, and Neil and Daniel too. 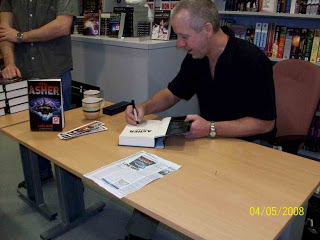 In a further note. The second picture here is for Jacko on the island of Crete. Yes, the pen you bought me served very well. Oh, also for Jon Courtenay Grimwood, whose SFX review is prominently displayed. Cheers!