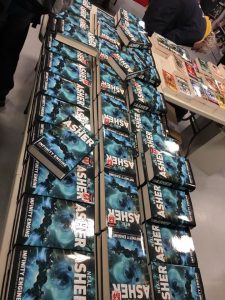 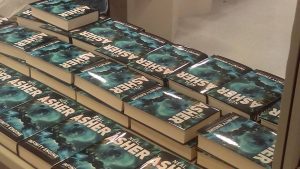 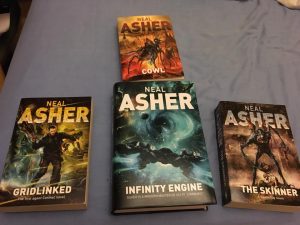 I headed up to London aiming to arrive at the bookshop at around 4.30 where I was to meet the Macmillan publicist, Jamie-Lee Nardone, outside. The trip was fast so I ended up wandering down towards the shop at about 3.45. Not wanting to hang about there I stepped into a nearby pub and whiled away the time with a few whiskies. 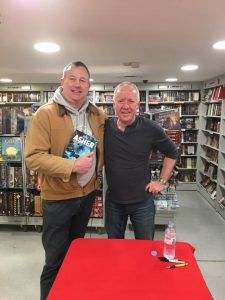 I then met Jamie outside the shop and we crossed the road to eat burgers and drink a couple of beers before going into said shop. First order of business was to sign maybe 30 or so copies of Infinity Engine people had ordered. I managed to put a pen through the page of one copy, then spilled coffee on someone’s computer mouse. Maybe those whiskies hadn’t been such a good idea. 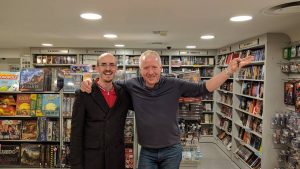 Out in the shop I signed plenty of books. I’m told there were about 30 people there but everyone had more than their copies of Infinity Engine. This I guess is my fault since I don’t do signings very often. Of particular note was the stack brought by Sharon Sasaki from Canada – it stood about four feet tall. And thanks for the pen Sharon! 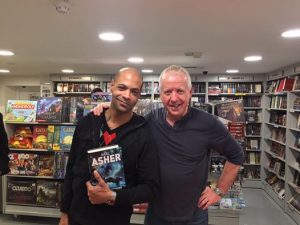 Jamie took lots of pictures with people’s mobile phones and all was good. Thanks too to Adam? Gerard? ( Sorry, but while I can remember most details of 140,000 word book, I forget people’s names) and his wife who brought me a gift of a bottle of gin. Checking the label I see that it’s 57% proof so that’ll be an interesting experience when I start imbibing (not yet, I like a big space between my hangovers). 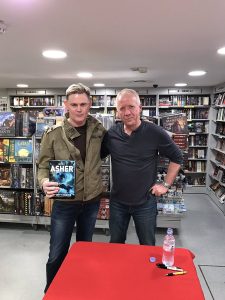 After signing the books people had bought and brought I then signed the bookshop stock. That was a nice quantity so if you want a signed copy get down to Forbidden Planet now. Next was a venture around the corner to The Angel where various fans plied me with beer. I don’t think I was too disgraceful … then again there are pictures yet to appear. I did my circulating but sorry if I missed chatting to any of you. 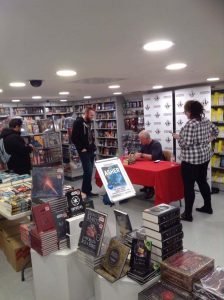 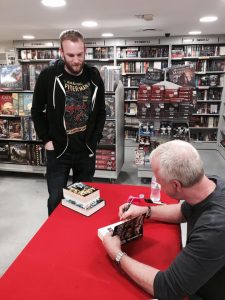 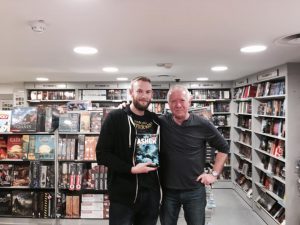 At about 10 I buggered off to catch a train. I got aboard determined not to fall asleep and end up in Southend like the last time. A guy sitting opposite me was having a similar problem – talking on his mobile phone with earphones then slumping sideways in his seat and snoring. 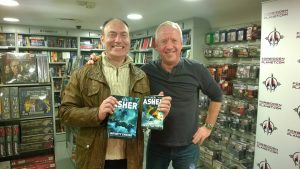 I was fine and got out at Wickford. I then asked a woman sitting in the station about the train to Althorne. Apparently there wasn’t one but her brother was picking her up and that’s where she was going. Amy and Lawrence gave me a lift and dropped me off near my home. The kindness of strangers eh? 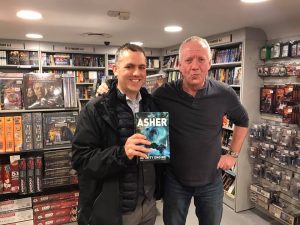 This morning I’m not particularly hungover. Maybe that was due to the ‘organic’ beer in The Angel. I just went for a 3-mile walk to collect my car and shall now slide back into the day job. Y’know, space ships to blow up. Ho-hum. 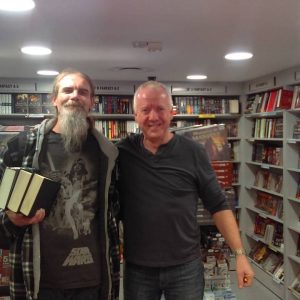 Cheers to those who took these pictures, which I swiped off Facebook. And my thanks to the staff of forbidden Planet.