Skip to content
So, I turned up at the offices of Macmillan at about 12.20. I was a bit early but didn’t fancy mooching about the streets of London until it was time because it was bloody cold. After I’d signed in and sat down Louise Buckley came out to keep me company for a while. Only then did I spot my books in the display behind the reception desk. 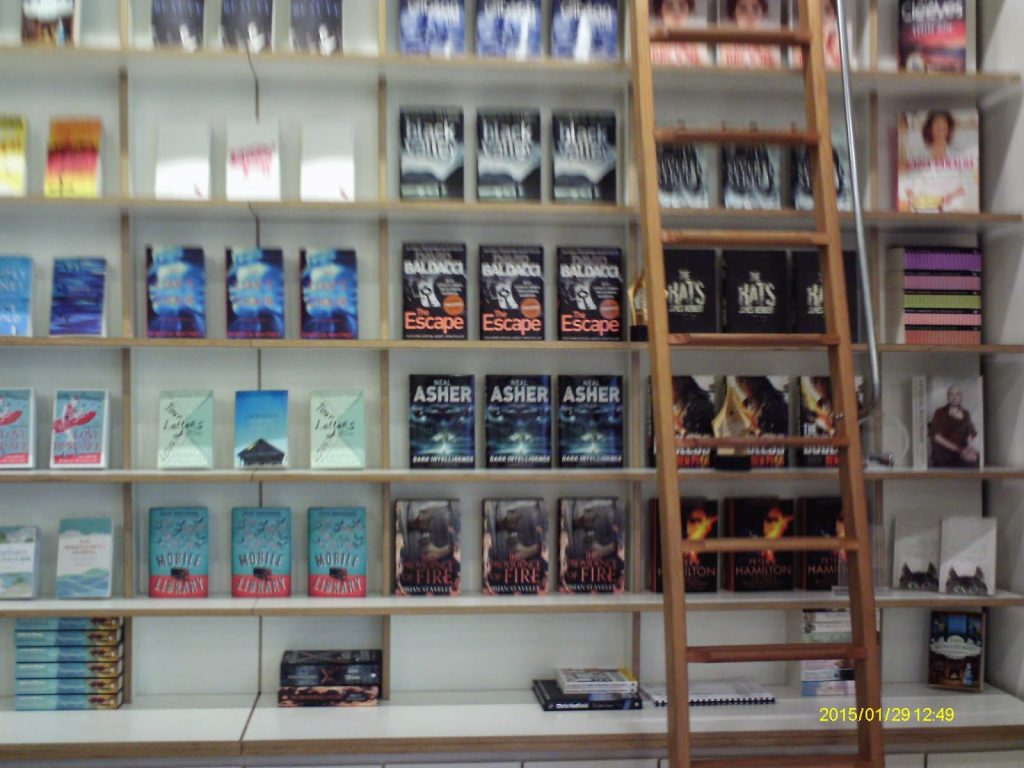 Bella Pagan duly arrived and we headed out to a nearby pub/restaurant. A short while later the others arrived and an enjoyable 2 hour lunch ensued. From left to right these are James Long, Bella, Me, Julie Crisp and Sam Eades. 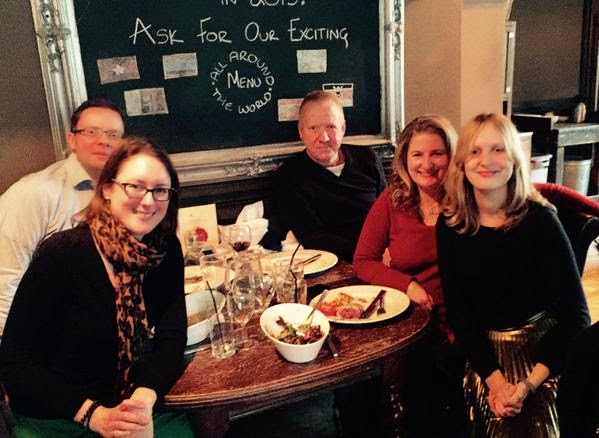 These guys had to go back to work afterwards so that left me at a loose end for a while. I took the tube over to Holborn and wandered towards Forbidden Planet, slipping into a pub called the Princess Louise for a glass of wine. There I was alone effectively in a booth by the bar so I had a stealthy vape or two. The barman spotted this and told me I could not do that in there. Fucking jobsworth. This annoyed me so I left. This, I decided, was probably a good thing because I did not want to turn up at my signing completely bladdered. I just turned in the opposite direction from Forbidden Planet and walked up High Holborn for half an hour as far as St. Paul’s before turning round and heading back. 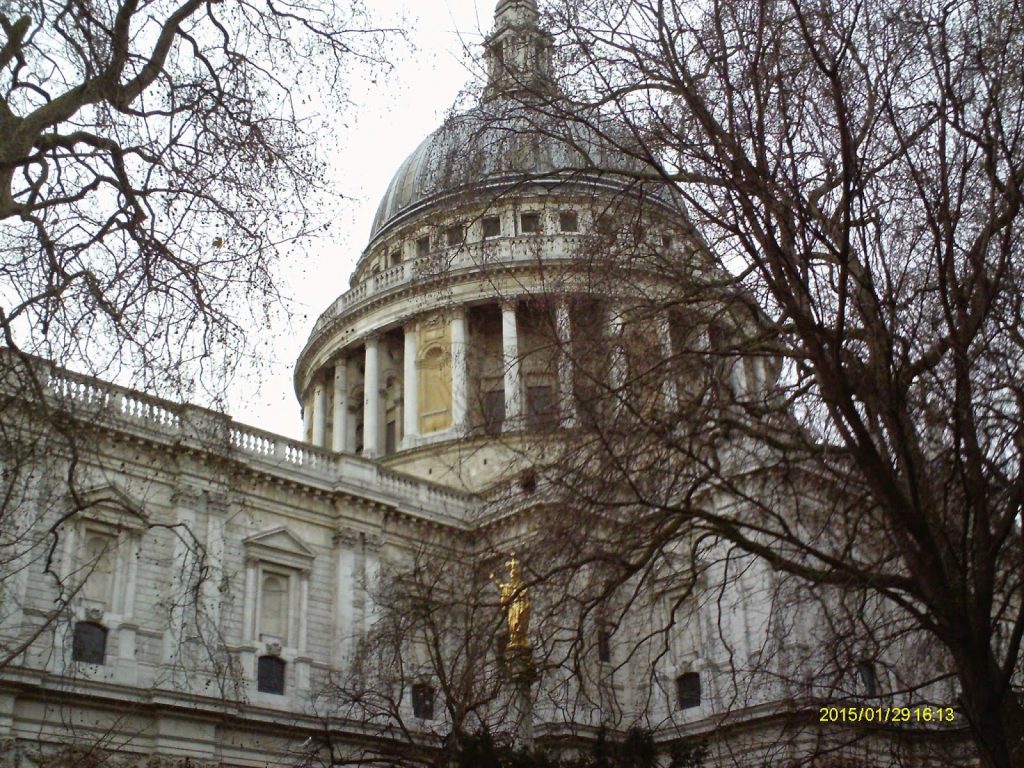 I arrived at Forbidden Planet at about 5.20… 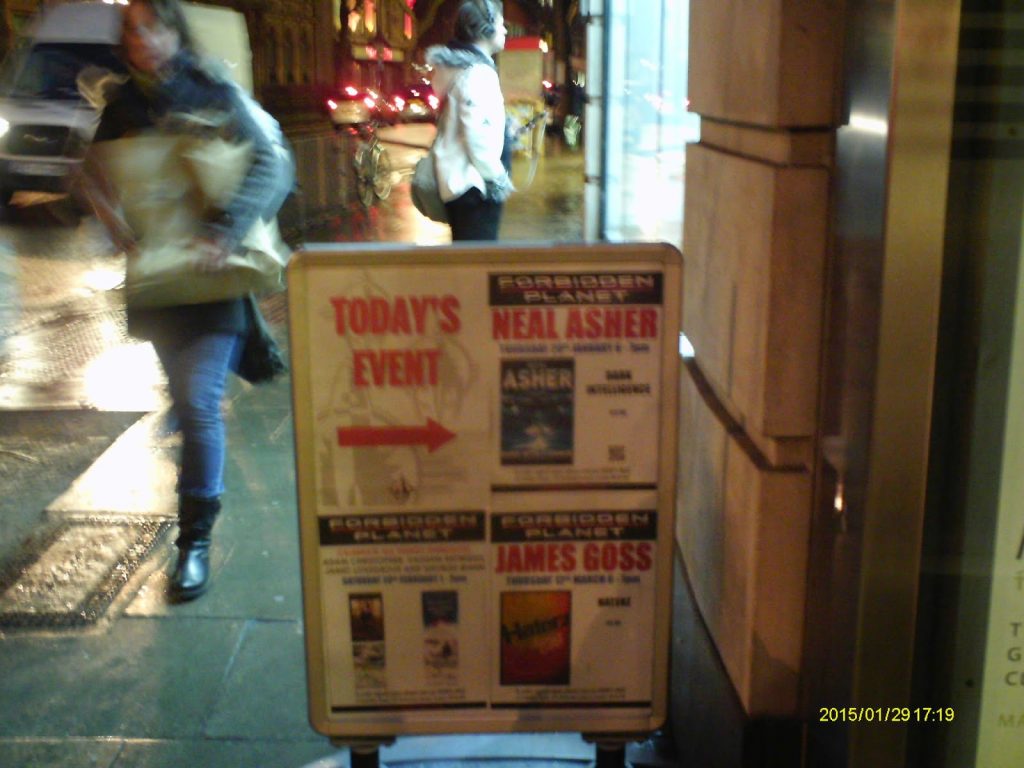 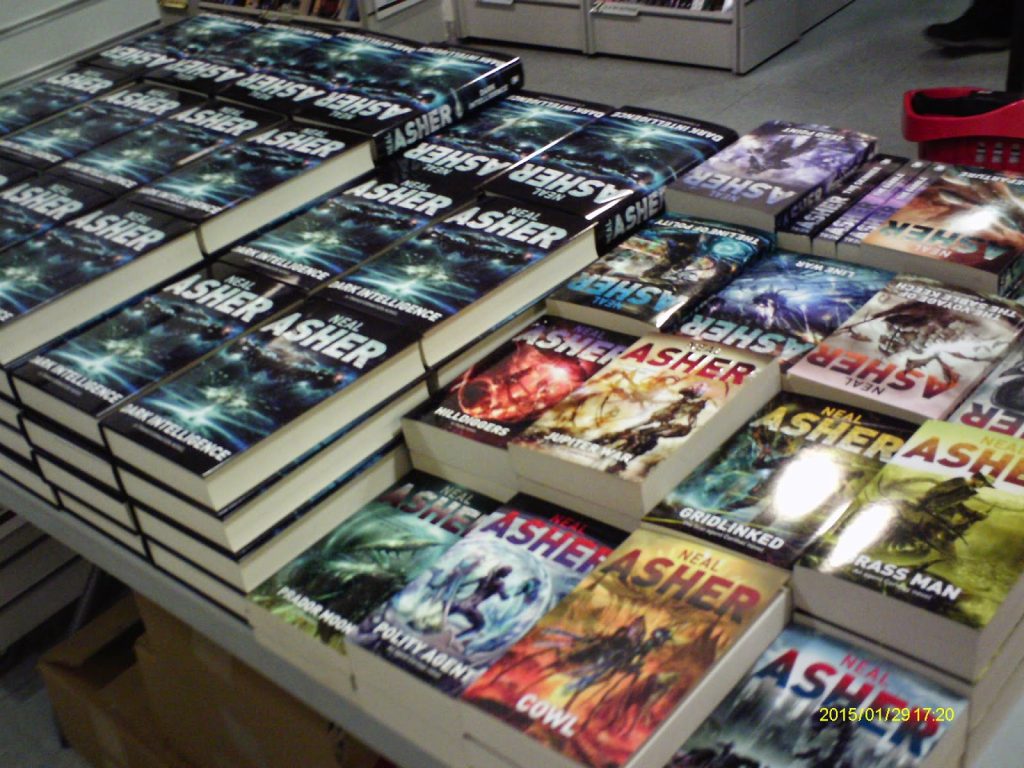 …and was conducted into their backroom offices. The décor there tells you precisely where you are, especially the aliens climbing out of the desk. 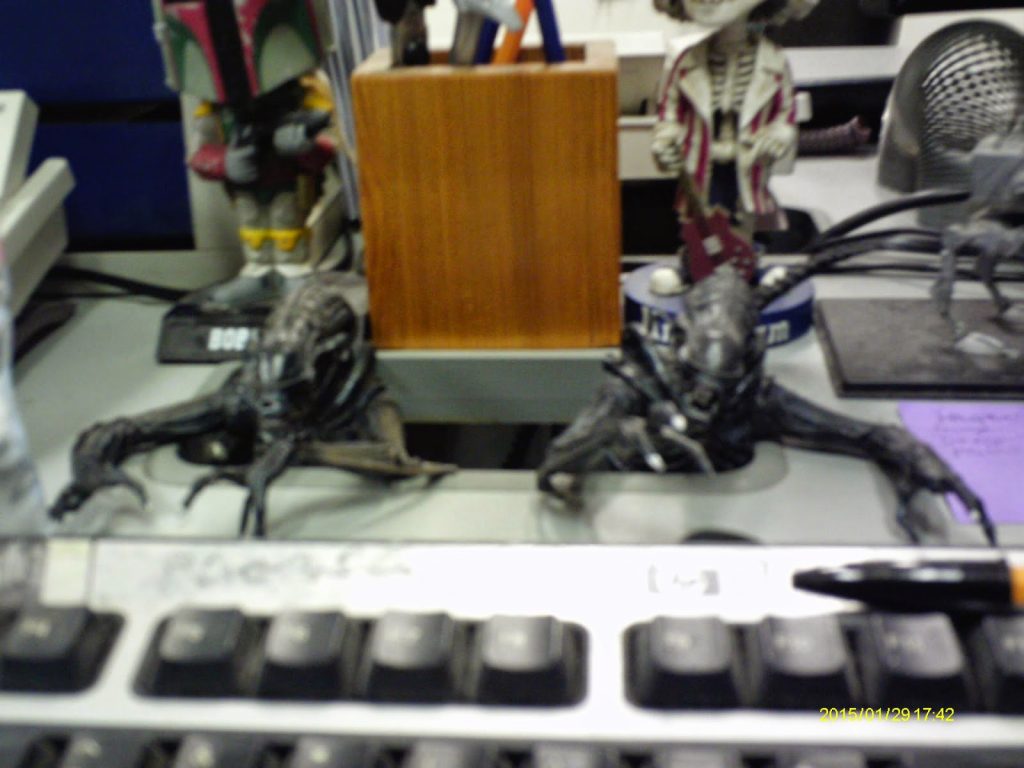 The staff brought in a stack of my books to sign for pre-orders. Sam Eades turned up a little later for moral support as we waited for signing time. I had coffee and a chocolate biscuit, both of which I ended up abandoning when I was told there was a queue outside. 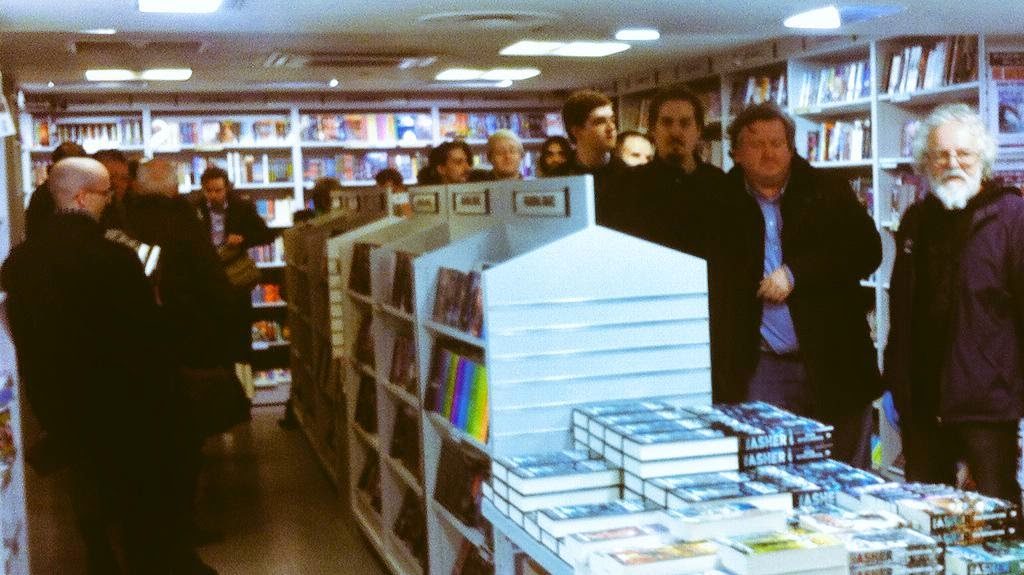 When I went out well there was a queue – about my first ever – but then I guess that’s what happens when you haven’t done a signing for 7 to 8 years. The first two guys here were collectors who had me sign 30 to 40 books. I recognised the first guy from a previous signing – tad unnerving to note he was right there are the front of the queue wearing surgical gloves! 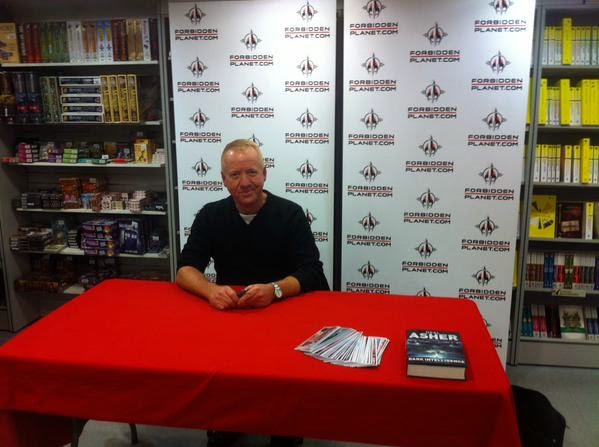 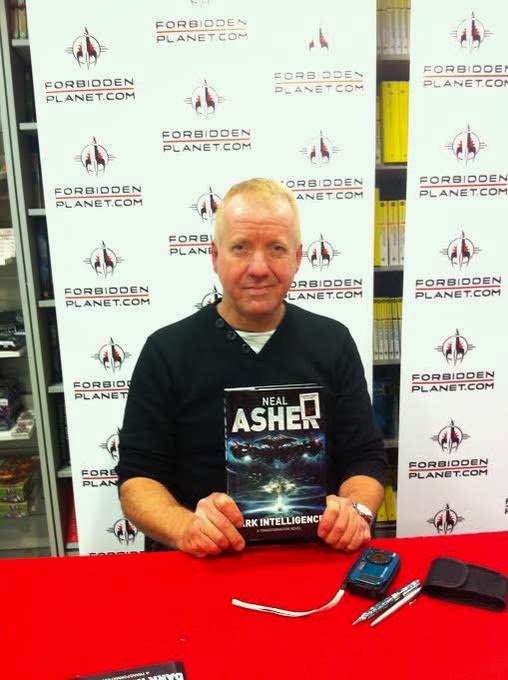 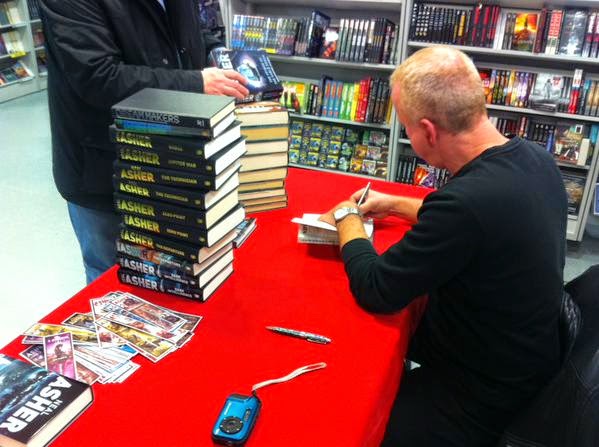 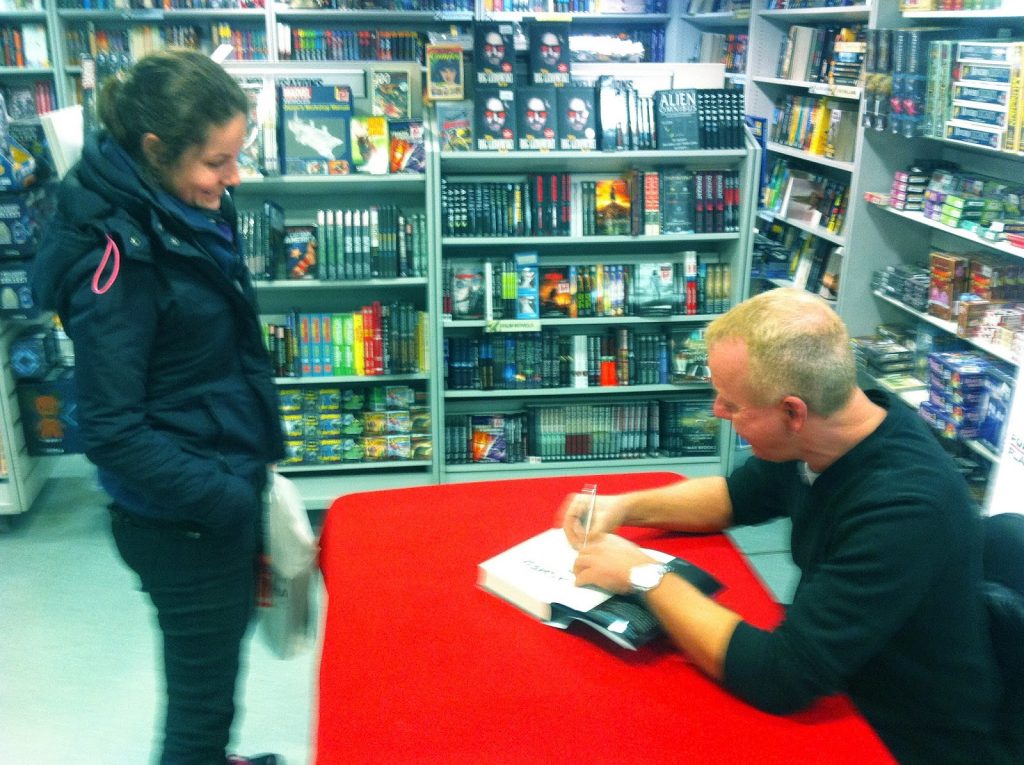 The whole hour was used up signing books and standing up for photos. I’m told that out of 100 copies of Dark Intelligence there were 30 left. Whether the figures included those I signed for pre-order I don’t know. Here’s a few of the guys who were there. 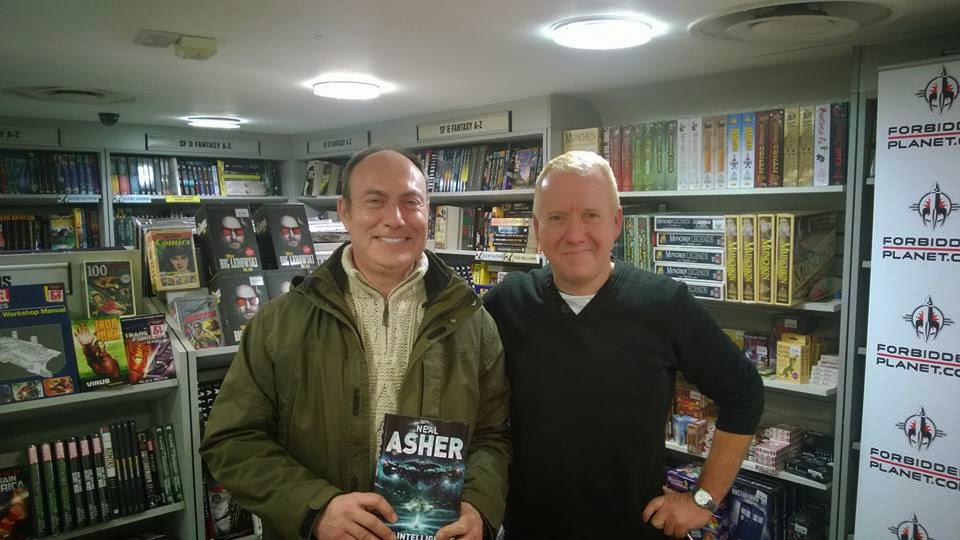 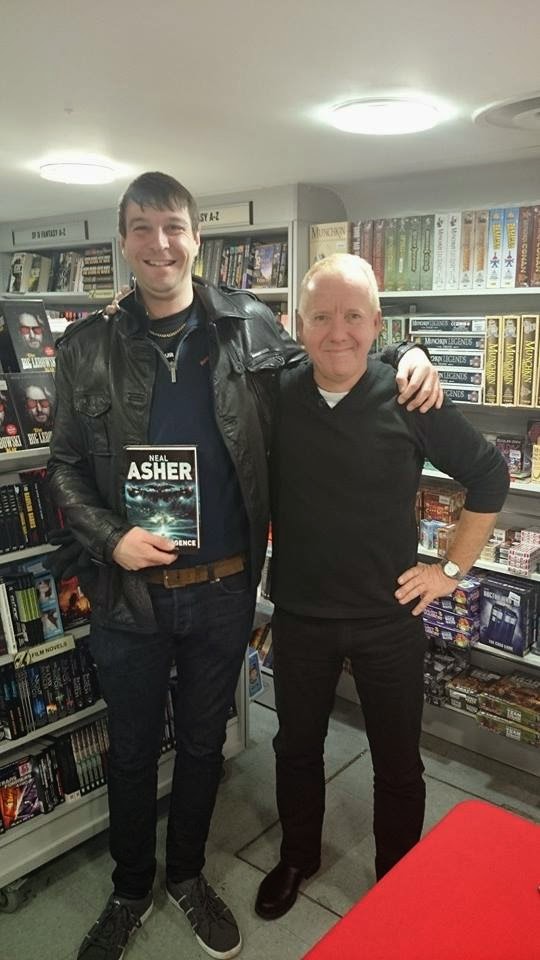 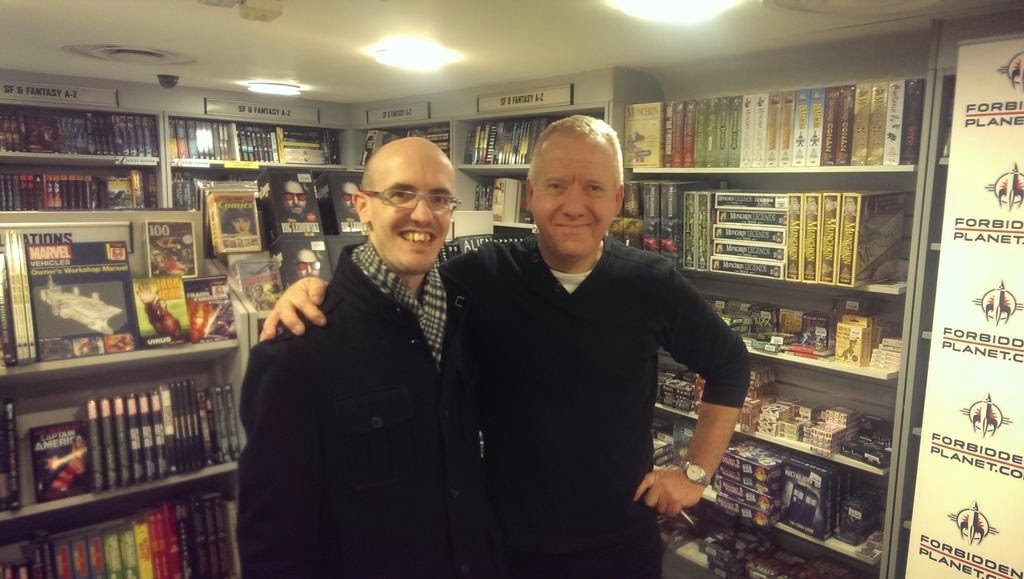 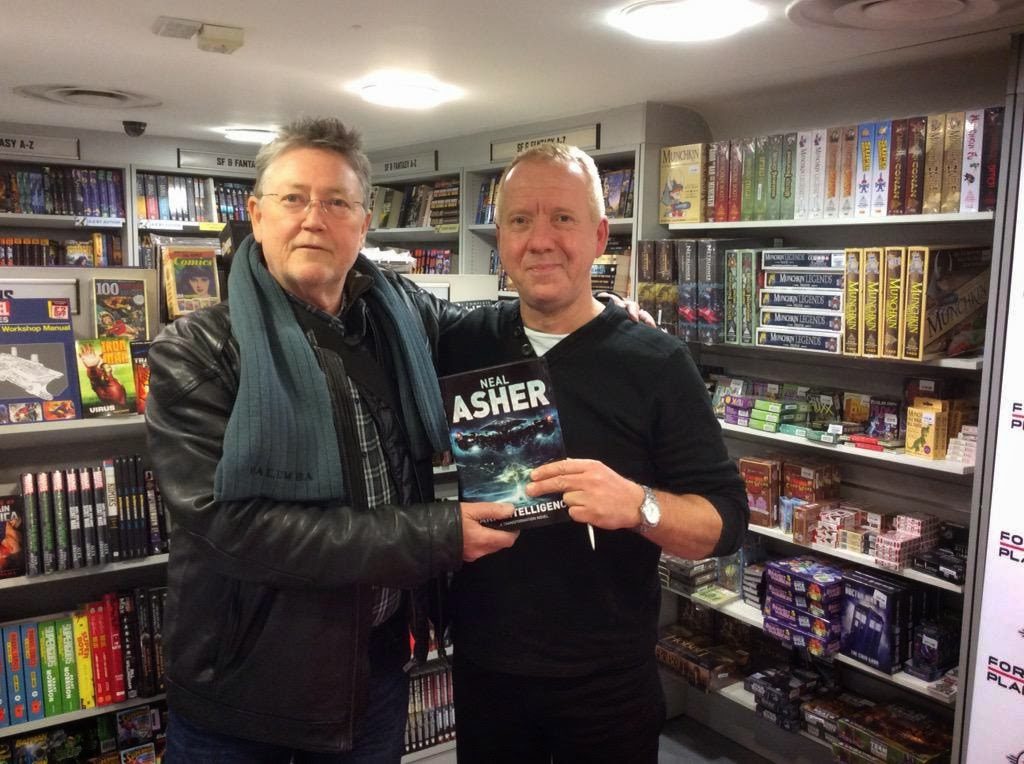 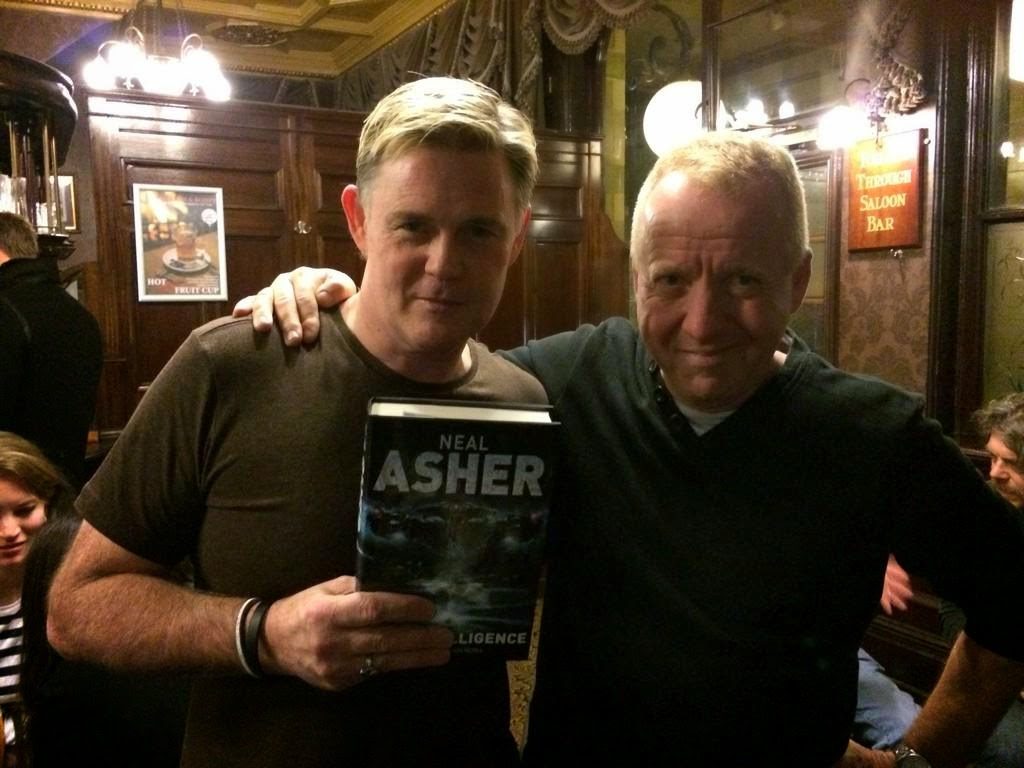 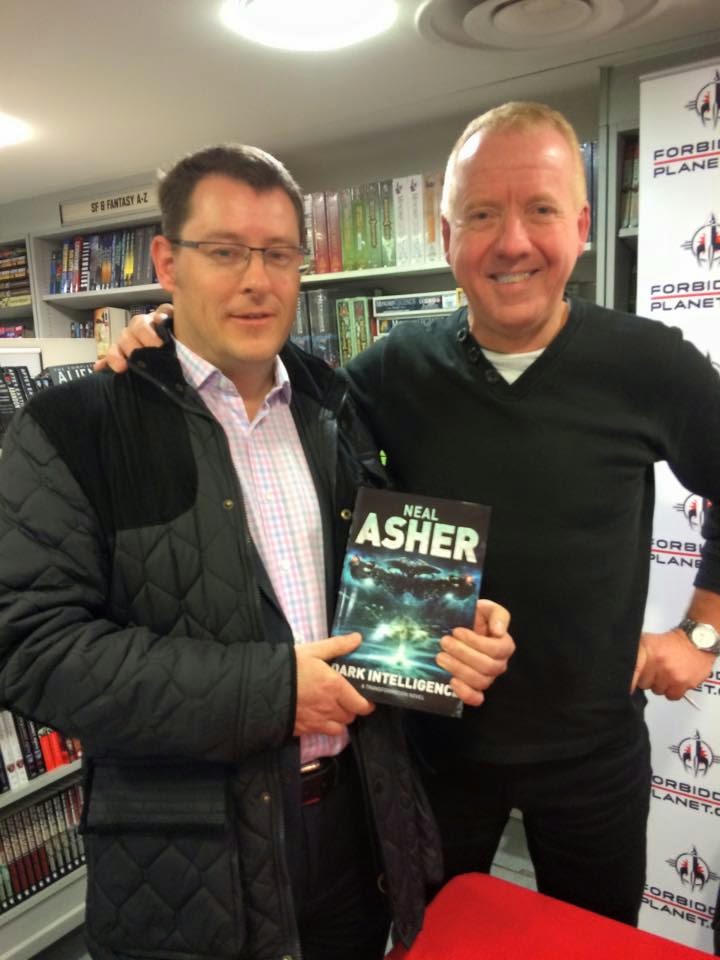 After the signing, as was my habit on previous occasions there, I went round to The Angel for a beer or two. Some of my fans were there and an enjoyable evening ensued. Right now I must apologise to those who attended who didn’t know about this. I didn’t want to broadcast it and end up swamping the pub and sort-of assumed that those who follow me on Twitter and Facebook knew about it.
At kicking out time I finally managed to buy a round. Once that was gone I said my goodbyes and headed off. It was about midnight when I caught a train back towards Wickford. I remember seeing the first station it passed through then nothing afterwards until some woman shook me awake. I’d slept through numerous stops, missed the one at Wickford and now the train was parked up at Southend Victoria. Bugger. I was too knackered to think about getting a train back so got a taxi home, which cost me £50.
But in all, this was successful and enjoyable. It’s humbling to see fans who have travelled quite some way just to get my scrawl in a book. There were people there who had come from France, Germany and one even from Japan. If there’s anything that is going to reaffirm my intention to get back to writing properly then this is it.