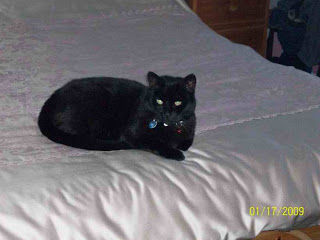 Well, Friday 13th this year has lived up to its reputation. All through the day the weather was grey, miserable, pissing down and then, in the afternoon, a knock at the door. Our next door nieghbour Heidi was stopping off to tell us that she’s had her cat, Basil, put down. This is the cat who, the moment he moved in next door, clambered over into our garden and came to say hello. Thereafter his visits were constant; every morning we’d find him waiting at the back door. So, coming back from Crete on the 10th we were looking forward to seeing various people, and him. We did see him, but he was a bit slower, looked a bit older. Little did we know we were going to see him for such a short time. He had pancreatic cancer that had also spread through his body – no real escape from that one, I know since it was what got my father. Damn, bugger and fuck, which is probably a mere fraction of what Heidi is feeling now.