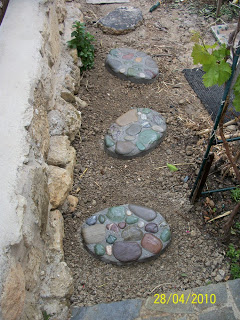 News from the Cretan front. Damnit, I put my back out and have been walking about like an 80-year-old for the last three days … hang on, my apologies to 80-year-olds, my Mother is 83 and gets about a damned sight faster than I have been lately. And no I didn’t do it while digging a hole, nor did I do it while lifting something heavy. As always with this sort of thing I turned at just precisely the wrong angle at the wrong speed in the wrong direction at the wrong phase of the Moon. Or something. Caroline did the same thing last year just sneezing.

I have, therefore, not achieved a great deal of work on the house. I did come up with an idea for getting across our garden, which at present is always in one of two states: dust bowl or mud bath. Here attached is a picture of slabs I’m making from beach stones cast in concrete, in a mould carved from insulating foam. About three-quarters of a bucket of mix goes into each – the remainder I use to cement some more stones on our garden wall around the back. 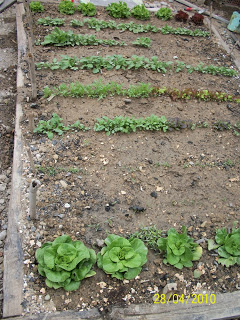 What else? Still cloudy and cool on some days up in the mountains, though mostly it’s bright sunshine and a temperature above 20. Down in Makrigialos, as ever, the temperature is always a minimum of 4 degrees higher. Did we move to the wrong area? No, later on those living down there will be in mosquito hell and will need the air conditioning on so they can sleep at night. Interesting thing about the mosquitoes: their population explodes with the influx of tourists then, when the tourists go, a huge hungry population of the buggers remains to compete for a much reduced food supply.

Everything is growing madly, the only seeds I’ve planted yet to germinate being chilli and aquilegia seeds. We’ve got radishes, lettuce, rocket, onions and carrots coming up in a raised bed, and in pots and elsewhere: coriander, basils, cherry tomatoes, sweet peas, snapdragons, coleus, lupins, some local succulents (don’t know the name) and various cottage garden mixes (and other stuff I can’t remember right now). I’ve attached pictures of these, along with a picture of one of our garden visitors. You get no sense of scale with that last picture – the little monster is only a centimetre long. 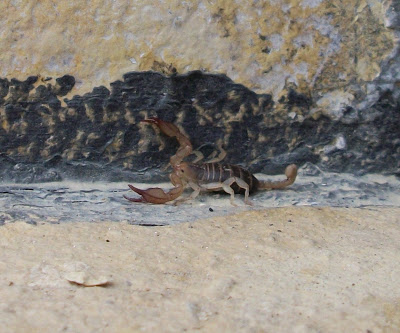