Vaudeviewgalor Randisraisins asked me if glisters possessed antennae, my tardiness in replying resulted in the previous picture, but now, after

And I was just about to reply to you with this from The Skinner:

The second male glister flicked clumps of hairlike organs on its head, registering the tail-end of a low-pitched squeal in what served it as ears, but so stupified was it by its current pleasure in gustation that it could not identify the sound. Perhaps this was understandable, since never having heard a brother’s death-squeal before. Waving its antennae, it detected only an overwhelming taste of whelk, but that was perfectly understandable – so many of them having recently been torn apart in the vicinity. It gave a lobsterish shrug, and went to take another bite of the wonderful bounty of flesh strewn before it. The wall of flesh that rolled over it and its meal, as well as uninvited leeches and prill, was as yeilding as old oak – the the great mouth behind just hoovered them all up. 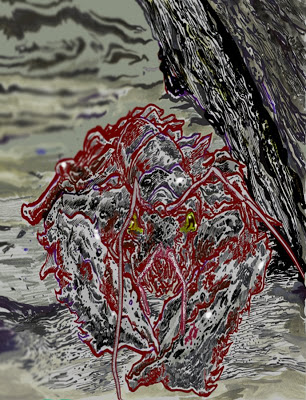