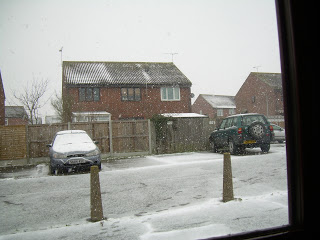 So, we get a few days of snow, in some places lying a foot deep but in most places sitting under the six inch range, but it’s noticable how TV reporters won’t let the truth get in the way of a good story. I saw one reporter the other night walking across a churchyard through six inches of snow and, since the stuff was barely up to her ankles, can only assume she’s one of those who has a problem with decimalization. That would be six centimetres dear.
One would think, by the news, that the home counties have become an extension of Hurricane Alley, during an earthquake, and probably with a Biblical plague or two on the way. All this freaky weather is causing ‘traffic chaos’ as cars fail to negotiate a bit of snow turned to slush by gritting lorries; schools have been closed and many people aren’t turning up for work; London buses weren’t operating and, apparently, it’s been snowing underground since the tube closed down.
It seems that our society is now completely geared to cater for the lowest common denominator: the prat in his car who has failed to comprehend that ice is slippery so crashes and snarls up the road, or little ADHD Jasmina who’s fall in the playground will result in her bloated scrounging mummy suing the school, and that this is then taken advantage of by those perpetually looking for an excuse for a day off work.
We are warned, should we need to brave these terrible conditions, that we should load up our cars with hot drinks, warm clothing and a selection of igloo-building tools. With the complicity of the hysterical media, it appears the people of this country have been nannied into a permanent state of infantilism. I’m guessing that we won’t be turning out any Shackletons in the near future.