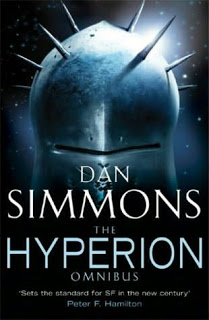 Be warned: there are some spoilers here…

I really enjoyed many aspects of the Hyperion Omnibus and would certainly recommend it to anyone, however (isn’t there always one of those?), it was a bit of an up and down experience for me. The Priest’s Tale was excellent, with its cruciform parasites and how the horror of them for a catholic drove Father Dure to do what he did, and I quite enjoyed how that plot thread was woven in later on. But balanced against that, what later seemed the proselytising of the C. S. Lewis kind, with a bit of L. Ron Hubbard thrown in for good measure, had me gagging. Apparently love is a fundamental basis of the universe, whilst god, being woven in at the Planc level, transcends time and is the triune entity of the Christians … and lo the messiah is to be born!

The Soldier’s Tale with its violence, military technology, mysterious woman (and with Kassad’s yet to be explained encounter with the shrike as the mysterious woman) I much enjoyed too, though later on this was a plot thread that tended to fizzle. The Poet’s Tale, whilst still enjoyable, suffered from a problem I felt was endemic throughout the books: too much in the way of literary allusions and pretensions. How often I found myself skipping the obsessing about Keats and pointless quotations of poetry. There’s much about the power and wonder of poetry and poets, and the implication that isn’t the pen mightier than the sword? Yeah, well, take your Parker to your next sword fight and see how you get on. The Consul’s and The Detective’s Tales were great too, but by then I was starting to get anxious about the proliferation of ideas and plot threads and the possibility of this not completing.

The setting of Hyperion was excellent, with this whole story taking place under a sky lit by interstellar war, as was the interplay between the shrike pilgrims. The tree of thorns is a horrifying image that sticks, and the time tombs were the kind of idea just about any science fiction writer would be jealous of.

The shrike itself was good whilst only glimpsed, but suffered under close inspection. My feeling was that it started out as a monster from Dr Who and was not cured of the rubber mask syndrome by the later add-ons from Alien. And, now I’m reading Endymion, by its Terminator II transformation into a good guy.

There were lots of ideas and threads needing to be tied together in these books, and so they were, sometimes very well and sometimes in a kind of soapish babble. Simmons did manage to pull the rabbit out of the hat, but it had lost one ear and most of its fur during its stay. Still, don’t get me wrong, there are hours and hours of science fictional reading pleasure here. I in fact loved the whole massive chaotic canvas of this story which, really, wouldn’t have been possible without that mass of ideas and interweaving plot threads.