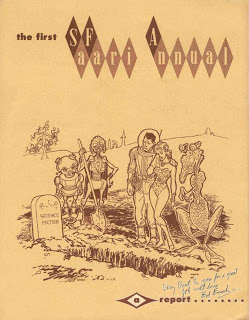 If you have a preoccupying fear of having a serious illness you most likely suffer from hypochondria or hypochondriasis. A person with hypochondria continues thinking he is seriously ill despite appropriate medical evaluations and reassurances that his health is fine.
When I noted in my final point of the previous little rant, I’m betting there was some plonker declaring the death of SF the moment Sputnik beeped or just after Neil Armstrong stepped onto the Moon, I hadn’t checked, but it’s nice to be proven right.
First comes a link from Gary Farber:

Who Killed Science Fiction? won the Hugo Award for Best Fanzine in 1961. The Fifties were rife with talk about the death of science fiction, and Earl Kemp’s symposia of so many sf pros and prominent fans summed it all up.

And over at Asimov’s Dave Truesdale comes up with:
“Anthony Boucher (co-founder of F&SF, with J. Francis McComas), in his introduction to the classic A Treasury of Great Science Fiction , explains it this way (remember that the then USSR had successfully launched Sputnik into orbit on October 4, 1957, and the Space Race had just begun):

“When man entered the Space Age two years ago, the writers and editors of science fiction, who had so long been living in this new age, hoped for a fresh surge of reader interest, an expression of gratitude for accurate prophecy in the past and of interest in the possible accuracy of other, as yet unfulfilled prophecies.

“It seemed a logical enough expectation, but it was a fallacious one. The new readers did not arrive—to some extent, at least, because they were put off by the cry of the press (never happier than when it can claim a miracle and coin a cliché): ‘Science has caught up with science fiction!'”

. . . “But facts are impotent against loud and frequent assertion. Readers believe that science has ‘caught up’; and somehow the very fact of s.f.’s accurate prophecies turns into a weapon against it, as if a literature of prophecy should become outmoded the instant one of its predictions was fulfilled.”

Note that in full context, Boucher was not claiming that SF was a literature of prediction, only that sometimes it turned out that way.

Why the hypochondria? Probably because there are those who love science fiction so much that the thought of it dying terrifies them, and they must continually prod and poke it to check its health. The mere fact that debates like this kick off and elicit so much of a response demonstrates that science fiction is in rude health.