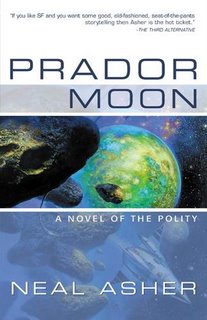 I wandered up the pub yesterday to meet a chap who lives on the other side of Maldon. He was in at the start buying a first edition of Gridlinked and ever since buys my books when they first come out and gets them signed by me. It has become something of a tradition. This was also the first time for me to see a copy of this, and very nice it is too.

Neal Asher takes on first contact, Polity style. This original novel recounts the first contact between the aggressive Prador aliens, and the Polity Collective as it is forced to retool its society to a war footing. The overwhelming brute force of the Prador dreadnaughts causes several worlds and space stations to be overrun. Prador Moon follows the initial Polity defeats, to the first draws, and culminates in what might be the first Polity victory, told from the point of view of two unlikely heroes. Cover by Bob Eggleton.