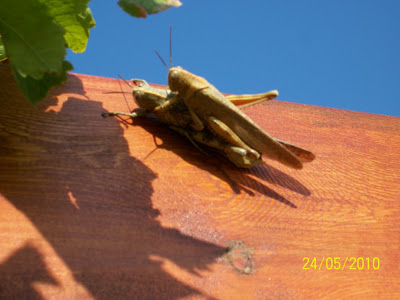 I photographed these two up on our pergola and, my goodness, an insect’s life might be a short one, but it’s certainly a merry one. These two were at it for three hours in the afternoon and then, the next day at about the same time they were still there, so maybe they were bonking for twenty-four hours. But then, considering what happens to a praying mantis male after he mates, maybe the male here (cricket or locust) spent all that time figuring out how to get off without being eaten. Anyway, it’s certainly springtime because shortly after seeing these two we noticed a couple of birds on the nearby roof occupying themselves similarly.

Our ruin now has a roof. Laying the concrete slab, the plaka, took six people: one up on the roof spreading the stuff, one mixing, and the others hauling up big buckets of mix. Luckily the weather was just right for the job: cloudy with a few spatters of rain. The problem with laying concrete here, when the weather is mostly hot and sunny, is that it tends to go off too quickly and crack. It is also the case that after it has been laid it must be frequently soaked. To keep himself occupied after the job, so he could periodically go up to the roof with a hose pipe, Mikalis suggested we use my new barbecue. He got the meat and I provided the salad and the beer. 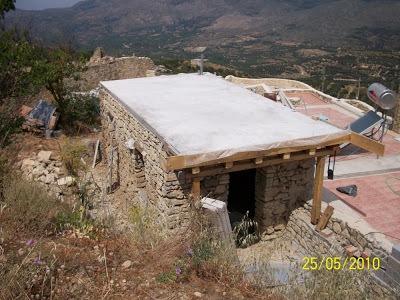 At midday the concrete was down, the barbecue fired up, the beers in a cool box. The weather had improved by then so we all sat eating barbecued pork ‘brisolas’, salad heavy on the salt and olive oil, fresh bread that was so good it needed no butter, and supping chilled bottles of Amstel. You gotta love the attitude of these guys to the working life. Caroline and I retired after a few hours and left them to it, then after it was all over, I went up to hose the roof four times. Mikalis, obviously concerned that the thing didn’t crack, also turned up in the evening and hosed it down once more. Right now, as I type this, I can hear electric chisels going as they take out the old pointing and remove the old render from the walls ready for repointing.

Now, this is a science fiction writer’s blog, though you wouldn’t think so reading the last few posts here. Sad to say, with everything going on around here, I haven’t achieved as much as I would like to on the writing front. But not to worry. Since I managed to do the last two books well before time, I’m three months away from when I should even start the next book. Zero Point has reached 19,000 words and the story is progressing well. I don’t really want to say too much more about it, since you reading this have yet to see the first book of The Owner sequence, The Departure, which comes out in August 2011 when I am to deliver Zero Point.