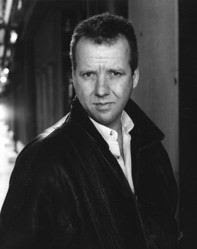 I recently received an email from one Jonathan Bauer, a relative of Jerry Bauer, who has died. He was the guy who took that first photograph of me you’ll see in older copies of my first books (to the left here). Jonathan asked if I could write a note to be read at Jerry’s funeral. I fear I missed that … deadline, but here it is for you.

It’s been eleven years now since my photograph session with Jerry Bauer, so please forgive some hazy recollection. This was all a bit odd to me since I’d only just been taken on by Pan Macmillan and couldn’t quite accept that readers might want to see a picture of me. Caroline and I met him where instructed at Temple underground station then I believe went off to a cafe where he bought us coffee. I can’t remember if it was at the station or in the cafe where I saw his well-worn cameras, one loaded with colour film and one with black and white. I wondered why he hadn’t gone digital, but obviously these were the tools he was used to. He led us off into the streets around Temple, favoring litter-choked alleys where I could pose as the mean and moody hard-ass SF writer. I felt like a complete tart and slightly embarrassed, folding up the collar of my jacket, dipping my head just so, noting people wandering past and gazing at me in puzzlement as they wondered who I might be. Whilst all this was going on we chatted to Jerry. Caroline was fascinated to hear stories about him photographing Julie Christy and (I think) Dirk Bogart. When he casually mentioned another SF writer he’d photographed, Robert Silverberg, I repeated the name, slightly gobsmacked. He reacted enthusiastically, ‘Do you know Bob?’ he asked me. Erm, not really. The previous names mentioned just sailed by me, but Robert Silverberg was a legend. Later, about the time we parted, he asked if I would like my photographs touched up. I said no — I didn’t want to frighten anyone when they actually met me.

Sorry to hear about your loss. Jerry knew I was nervous and quickly put me at ease. Seemed like a nice guy.