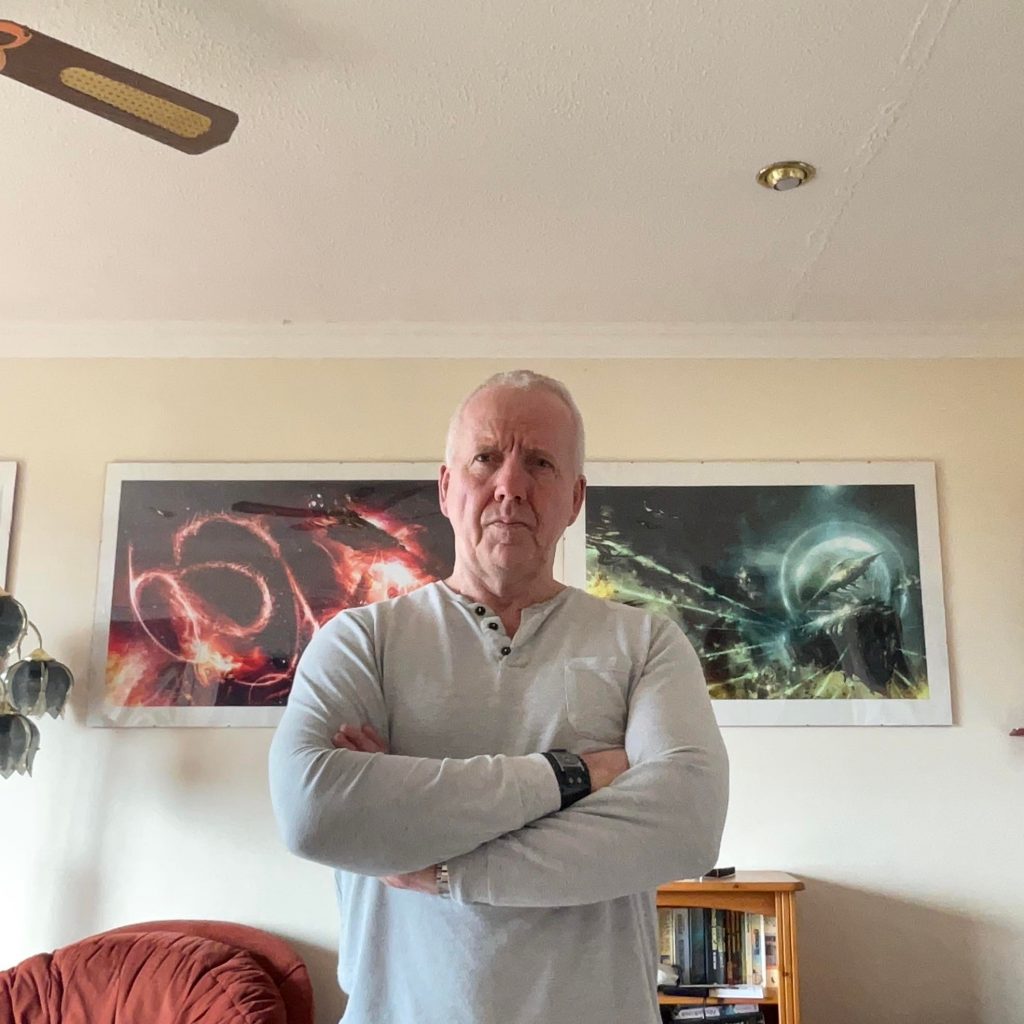 Those who follow me on the social media will know that for quite a few years now I’ve been on a health-optimising rollercoaster. The background on this I’ve detailed and you’ll find it by scrolling through the hundreds of blog posts here, but in précis it is this: 1) A life of booze, cigarettes and the usual food until past fifty. 2) Knowing I must do something upon seeing the decline of people around me of similar age or just a bit older. 3) Watching my wife die of bowel cancer.

Stopping smoking using e-cigarettes was a start because, as anyone who smokes knows, exercise is unpleasant while smoking and, along with other measures like diet, seems like a sticking plaster over the gaping wound of destroying ones lungs. Next was walking, mainly to ameliorate the psychological outfall of my wife’s death. With these my physical health improved markedly, though it took some years before the organ between my ears got back up to full function again. I lost a lot of weight and became quite fit, mainly because I couldn’t drink, wasn’t eating a great deal and was walking seven miles nearly every day. As my mind came back so did nasty habits, like drinking too much, eating crap, and like many in their fifties I wasn’t too happy with my side reflection in shop windows. Walking declined though I did other exercise like kayaking and weight training, but still the dreaded pod returned.

Phew, and now we’re up to date.

During all this time I’d started reading up a lot on ways to optimise health. In fact I was looking for ways to reverse or ameliorate 40+ years of bad choices. I’d hit a big one by stopping smoking, my exercise was good but still there was that fat. Fat is not good. Fat is hormonally active and can take you into diabetes. I won’t keep on about its many drawbacks sufficing to say that I needed to lose weight. I had always known that exercise does not cut it. There’s a perception out there that visits to the gym will take you along the course to the weight loss but it is simply not true. I’ve spent plenty of time in gyms and know that if you heave about the weights you’ll grow muscle, but every time I’ve done it the girth of my waist increased along with my biceps. And, frankly, when you sweat out twenty minutes on a cross trainer and burn only the calories of a slice of bread, you know that’s not the answer. The answer is controlling what you put in your gob.

So, over the years I tried fasting, and continue to do so. It works very well and drops off the fat at an astounding rate. However, though sometimes I would find it easy going into a fast, at other times it seemed plain impossible. I will continue doing this when I can, but find it difficult to sustain. What I needed was some method I could maintain: a change in lifestyle.

Part of that change arrived over this last year and that was knocking the booze on the head. I did 73 days and had a lapse, but now after that I’ve been six months off the hooch. There’s more about all that a few posts back here. Meanwhile, I had been reading about various diets. From what I am given to understand a ‘normal’ diet doesn’t work so well because constantly starving your body brings your base metabolic rate down. Your BMR could be 2000Kcals a day at the start of a diet, but if you go down to eating 1500Kcals a day you’ll eventually plateau with your BMR set down to that (with the side effect of feeling cold, miserable and lacking in energy) and then, when the hunger becomes too much to bear as it inevitably does, you’ll go back to eating as before and pile the weight back on, usually more than you lost. But I had also been seeing much about the ketogenic diet and thought it time to give this a try.

The theory of the keto diet is this: When you eat carbohydrates they knock up your insulin – big time if they’re simple carbs like sugar and starch. Insulin pushes one way to stick any excess you eat into fat cells and to a large degree prevents those cells releasing fat to be burned. If you can get your insulin down it is easier to burn fat. Ways of doing this are fasting ranging from those lasting 16 hours and upwards to days, or eating a diet without carbs – the ketogenic diet. Apparently you easily lose weight on this diet, so off I went.

After managing to do a fast of two days I dived in, eating main meals of just vegetables, eggs and meat, with a later plate consisting of cheese, nuts, raw veg and preserved sausage. I delightedly had cream in coffee too because eating fat is good while those bad carbs were down to 50 or 20 or sometimes zero grams per day. Hey, it’s all good stuff, fat is good, no problem! My weight, to my dismay, went up.

So no, the ketogenic diet is not as easy as some would have us believe. Delving into it all further I found that the reality is this: you do feel more full eating this fat based diet, you can lose body fat much more easily with your insulin down and hell I knew I was burning fat because my keto sticks were well into the purple and my breath meter readings were 3.0mmol/L and above, at one point even going as high as 8.00mmol/L, but the problem here is which fat am I burning, dietary or body fat? The problem here is that despite the claims of the keto fanatics, calories in and calories out still matters.

I convinced myself for a while that my weight gain was due to me putting on muscle, since I was hitting the weights regularly for an hour a day four or five days a week. I had in fact attained a body shape resembling a brick shithouse. But I was back to where I had been before while weight training with waist girth growing in consonance with biceps growth. Further investigation into the matter revealed a simple reality I had been aware of but was not admitting to myself: nutrient density. Nuts, cheese and cream are keto favourites but they are hugely calorie dense. You might not feel as hungry when you eat them, but seriously, check the number of calories in just a handful of nuts or, as had become a favourite with me, a pot of clotted cream. It was just too easy to eat too much.

I didn’t give up. I didn’t buy any more nuts or clotted cream, and reduced what I was putting in my coffee to a teaspoonful of full fat cream. The cheese went to being a rare treat rather than a staple. I was also more strict about the intermittent fasting I had introduced when my weight started climbing – not eating my first meal for 16 to 20 hours after my last meal the previous day. I did a two day fast at the start of this new course and my weight started to tumble. After a period of time I began to notice muscle definition even reaching the point where I could lose the end of a finger between the muscles on my biceps and forearm. Then I started to really feel like crap.

Now this is where it gets weeds and I don’t know what caused what. I’d also been reading about the benefits of lion’s mane mushroom and started taking the powdered version of that. It might be that I also picked up a bug – it certainly felt like that. I felt like I had a cold and then I got the roaring shits. Later reading reveals that lion’s mane can cause severe stomach problems. Or maybe I got a dose of covid. Or maybe, as seems possible, I’d over-trained. Or maybe it was a combination of all these. Whatever the reason I didn’t want to keep feeling like this, went off to the shops and bought carbs and, over the last five days stuffed myself. Almost immediately I put back on a lot of the weight I’d lost. Certainly much of that was glycogen filling up my muscles and my liver – another thing I learned is that though you will often read that glycogen weight is about a pound (500g) that is not necessarily true. It can go to two pounds and more, and this weight is multiplied three to four times by the water retained to hold it. I also stopped the gym for a week which didn’t help

Now, at the end of a week of no gym, no keto, no lion’s mane and eating carbs I feel better, but I still have no real idea what I’m feeling better from. Today, as I have done on a few occasions before, I emptied various food packets into my composter and skimmed slices of bread over the back hedge. I’m going back into keto, probably including a long fast, but certainly re-introducing the 16 to 20 hours fasts each day. I’ll return to the eggs, meat and veg and forgo the nuts and clotted cream, and I’ll be heading back to the gym. This time I won’t do anything beside that and hope no bug comes along to clobber me, then I’ll find out. If I start feeling rough again and end up spending more time on the toilet than I like I’ll know that straight keto is not for me and I need to apply some other strategy. Perhaps what is called carb cycling. . .

I’m a work in progress, as ever.

Hope this was helpful for those who are interested.

One thought on “Keto Eating and All That”