The old E. E. ‘Doc’ Smith books are no longer in my collection any more, having fallen foul of one of my general clear-outs, but I do recollect enjoying them when I was a teenager (Lensman and Skylark series). I think I dumped them because I was allowing myself to be influenced by the opinions of others at the time. They were also old, as in ‘astrogator calculates course with a slide rule’ old. It’ll be interestng to see what kind of a movie these will make, since this was BIG space opera:

The internet movie database has the Lensmen movie listed as sometime in 2011. 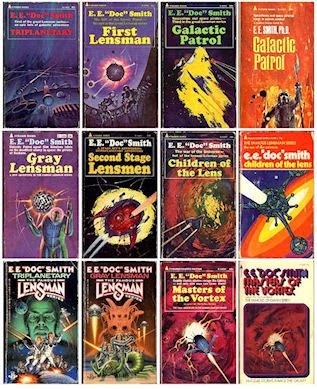 Writer J. Michael Straczynski said in 2009 he’s finished his second draft for Lensmen, and producer Ron Howard and Universal are happy with it. He said it’ll be very character-based, typical of Howard’s work, and yet the special effects will be cutting edge. And it’ll keep the massive scale of the original novels, as much as possible.