Skip to content
Just to repeat things here’s a letter I sent to my MP:
Dear Sir,
A number of months back my wife was diagnosed with a serious complaint that requires major surgery and, this tending to focus one on matters of health, we both decided it was time to give up smoking. However, having made numerous attempts in the past and simply failing, we weren’t optimistic.
Some friends, who had given up a few years before, handed over their stash of NRT including patches, gum, microtabs, inhalators and some electronic cigarettes. All of these worked to some degree but the e-cig was the most effective, even though the ones we had were a few years old and malfunctioning. We then, to our surprise, found them for sale in Tesco and bought a Vapestick each. These, with their ‘cartomizers’ and more modern design were even better. Better still, thereafter, was an e-cig with a small glass tank that can take various flavours of e-liquid. It was the moment I started using one of these that I had an epiphany, realising that I would never ever again smoke a cigarette.
Incidentally, since I’m a known SF writer (ask David Davis) who also blogs a lot, this has led to six of my fans finally taking the plunge and giving up smoking using the same method.
It is now the case that even if I cannot give up ‘vaping’ my chances of dying from all those smoking-related maladies have just dropped through the floor. These devices are massively harm-reducing. Ignore all this mealy-mouthed nonsense that starts with ‘but we don’t know enough’. We know that a ‘vaper’ breathes in nicotine, a vaporising substance found in asthma inhalers, and water. Nicotine is certainly addictive, but is no more harmful than caffeine. Yes, some further supposedly harmful substances have been found, but no more than are found in conventional NRT – trace amounts – and of course the merest fraction of a per cent of two or three of the thousands of chemicals and 60 or so known carcinogens in real cigarettes.
So, imagine my surprise and horror to learn that there are people who want to ban these devices, and that bans have in fact already been introduced on some trains and in some pub chains. Imagine how annoying it is for me to discover that legislation is being introduced, much to the delight of drug and cigarette companies, that will kill innovation in this new industry, make these devices difficult to sell, impose limits on the strength and flavours of e-liquids and, in essence will drive many ‘vapers’ back to smoking; many of the 1.3 million people now using e-cigs in Britain today.
This is madness. This reveals that activists at the likes of ASH are more concerned with activism itself rather than the purported reason for it. This reveals that such is the hatred of anti-smokers that they would rather people died than use something that looks like a cigarette.  This leads to complete Twilight Zone situations like one recently, when an NHS quit-smoking manager was complaining about a lack clients because they were using e-cigs.
Now, as my MP, what are you going to do about this? Here is something you can get behind that will actually save lives.
Yours Sincerely, 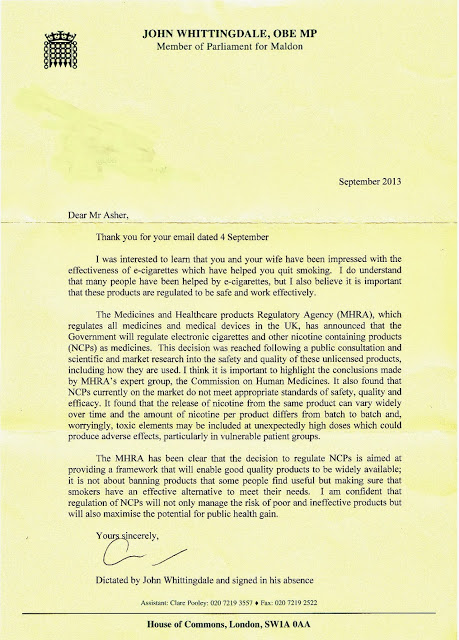 What a total twat he is. One e-cig company recently checked with the MRHA about getting their products licensed. If they wanted to license them all the cost was in the millions.