What was going to happen to Max? With Marjorie being moved into a ‘recovery home’ for an indeterminate period, he surely couldn’t stay in kennels. We considered the possibility of having him in our house, but ours is a small bungalow with a postage stamp garden. In one winter he would have turned the garden into a quagmire and have trailed in mud to destroy a pale carpet we’d recently had laid. If there was no alternative, we would probably have had him. However, we were in for quite a surprise.

We’d discounted the idea of Max accompanying Marjorie to the home. Surely the HSE would not allow this, surely those running the home would be terrified of being sued by residents or relatives of residents knocked arse-over-armpit by such a large Alsatian roaring about? Surely there were rules about this sort of thing? Surprisingly, those running the home were prepared to have him there. Apparently the rules are that a pet can accompany someone into a home, but people living in homes cannot buy pets.

Though it had now become a twenty mile round trip – travelling to Bradwell where the home is situated rather than to Burnham where Marjorie lived – we decided to continue walking Max. The home was a secluded ivy-covered mansion and when we arrived there, I looked around at some very old and ill people tottering around on Zimmer frames and wondered how having Max here could possibly work. Marjorie looked a lot better: clean, tidy, walking about without her frame. Max, however, looked in a terrible state. He had lost weight, he looked miserable, his back legs kept giving way – a common complaint in Alsatians and the one that usually precedes their visit to the vet’s for that final injection. I felt the staff in the home, who were hard pressed enough as it was, were rather annoyed about having a furry resident to look after too. 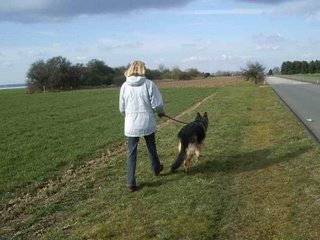 We took him out for a walk. It was bleak, windy, cold and wet, and we didn’t know where to go. We ended up heading generally towards the coast and the big grey loom of Bradwell power station. On the way we found a fenced-off football field where we could let him off his lead, beyond that we necessarily walked on the grass verge beside a long road. It was all rather depressing, and I suspected it could not continue. Then things slowly began to change.

After two or three exploratory walks we found an excellent route that took us out to the left of the power station, along the sea wall before it beside the Blackwater Estuary, onto a shell beach, then returning on the other side of the station along a nice walk before hitting the road again. We later discovered that we didn’t even have to walk all the way along beside that road, since there was a footpath in the field adjacent. As we continued walking him the weather grew steadily better into the spring. His legs no longer collapsed underneath him and he began to put on weight. And the staff in the home began to fall in love with him.

One day, when we opened to front door to the home, we saw a Filipino lady running towards us, a big grin on her face, with Max in hot pursuit. Max really liked her and followed her everywhere, so the other carers told us with some jealousy. He also had a bit of a game with the lady who fed him his dinner, for when she gave him his epilepsy pills wrapped up in a piece of thin ham, she necessarily had to chase him for a little while too. Slowly, over a period of months, Max’s usual reserve began to disappear. He went from being the only pet of a chair-bound old lady to a pet that belonged to perhaps ten of fifteen carers. Marjorie wasn’t vastly happy about this. He was her dog, yet it was infrequent when we arrived to find him anywhere near her. 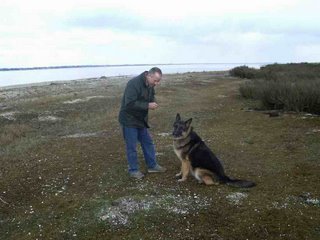 Many of the residents really liked him too, smiling benevolently when he was near and reaching out a hand to stroke him in passing. The night staff thought he was great too. When one of them took a nap on a couch he would sleep on the floor beside her. “I feel safe with him here,” she told us. Nothing quite like the assurance of a large Alsatian nearby when you’re on night duty. Marjorie’s daughter and partner often visited, taking Marjorie and Max up to the nearby pub. When carers went down to the local shop they sometimes took him with them. He was seeing more life, more action, than he had ever seen before. He was having a great time. On the odd occasion, when a door was left open, he wandered off and caused all sorts of worries. But eventually he stopped doing that. We would often turn up to find him sprawled out the back, on the concrete or the lawn, where the carers sat for their tea break.

Things had turned out very well, for him. Marjorie, however, was becoming increasingly confused and though her health had rallied under care, it deteriorated again.